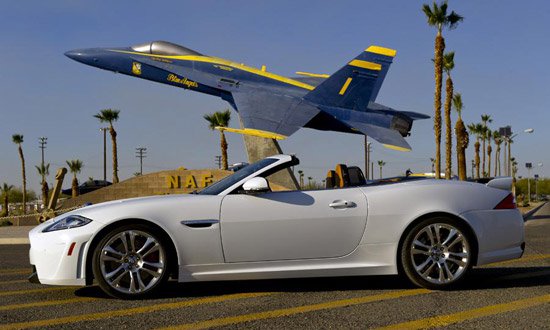 What is it?
The 2012 Jaguar XKR-S convertible is the ragtop version of the most powerful convertible Jaguar has ever built, the supercharged XKR-S.

What is it like to drive?
In just about every measure, this car is stunning. The exterior design is as sexy as cars get, with beautiful, graceful lines accented with purposeful scoops, flares and a carbon-fiber front splitter and rear wing. The exhaust note coming from the supercharged 5.0-liter V8 is intoxicating.

Our first moments behind the wheel were in a flat-out speed run down the main 8,500-foot long, 200-foot wide runway at El Centro Naval Air Station in the California desert. The air base, the winter home of the Navy’s Blue Angels precision flight-demonstration team, was also the location for several scenes from the movie Top Gun. This is fitting as we powered down the monster runway, top down, watching the speedometer climb above 165 mph. We were instructed to get off the power as we passed the 5,000-foot mark of the runway, giving us ample time to slow down using the massive disc brakes–15-inch rotors in front, 14s in the rear–to come to a halt. While we didn’t reach the car’s limited top speed of 186 mph, we have no doubt that given the room, the car will easily reach that speed.

A strictly standard car, the XF was shipped from Jaguar’s global headquarters in Whitley, Coventry, making it the first diesel Jaguar to enter the USA.The convertible drives much the same as the XKR-S coupe that we tested last June. The V8 has plenty of punch down low and pulls strong as the revs climb toward the 6,500-rpm redline. While the previous-generation XKR was noted for the whine emitted from the supercharger, with the XKR-S, engineers opted for a sweet exhaust note. Using a crossover in which exhaust from each cylinder bank is mixed before exiting out through an electronically controlled "active" exhaust valve, the car sounds like a Le Mans racer. We found ourselves dipping heavily into the throttle time and time again just to hear the magnificent sound.

The aluminum chassis is rock-solid and, according to Jaguar engineers, the XK chassis was designed as a convertible, so no additional bracing was needed to stiffen the chassis when the roof was removed. The convertible weighs in at just 88 pounds heavier than the coupe, because of the mechanism needed to operate the fabric top. The top will open or close in less than 20 seconds.

With the top down and the wind deflector in place, at freeway speeds we were easily able to carry on conversations with the passenger, or, when we were feeling like Top Gun, listen to "Danger Zone" by Kenny Loggins through the sound system. With the insulated top up, the car seemed only slightly louder than the coupe. Most of the noise comes from the massive Pirelli P Zero tires (255/35ZR-20 at the front and 295/30ZR-20 at the rear). But those tires produce tremendous grip, all the better to get 550 hp down to the ground.

Do I want it?
Of course you want it. But if you’re willing to throw down $138 large, you’d better hurry and then be willing to wait a year. The 25 convertibles (they sold out in a couple of days following the car’s debut at the Los Angeles auto show in November) coming to the United States this year are already spoken for, and only a few cars remain available for 2013, when 100 convertibles will be sold in the States, along with 100 coupes.

Jaguar’s goal of building a gentleman’s race car–the car lapped the Nürburgring in 7:50–a car that you could drive to the racetrack, have some fun in, then go out and have a casual drive around town, has been successful. While we would prefer a manual six-speed gearbox or even a dual-clutch unit to engage further in the driving experience, the six-speed automatic from ZF–the only choice available–is among the best automatic units in production today. The upshifts are fast and the downshifts have rev-matching blips of the throttle, giving you at least the impression of a manual box. You can switch over to a manual setting and shift the auto with wheel-mounted paddles. With a Dynamic Mode setting that changes the engine and transmission mapping for better performance, we found the computer to do a great job of selecting the right gear.

The XK line is set to either be overhauled following the 2014 year or allowed to fade away, making room for another, as-yet-unannounced line of luxury sports cars. Until that decision is made, the XKR-S represents the pinnacle for the brand. While it’s not perfect, it’s pretty damn good, not to mention wildly entertaining.