PAMPLONA, SPAIN – In the end, it is all about the aural. Oh, a few curves and bumps will assuredly send libidos careening well past common sense. If said bumps and curves are particularly, well, bumpy and curvy, your final destination may the wrong neighbourhood. Perhaps even the wrong side of the tracks. Such is the allure of illicit adventure.

But sultry looks are transitory, today’s femme fatale tomorrow’s dowdy librarian. Far less ephemeral is the soundtrack, the aural enticement that never seems to lose its seduction. Think Lauren Bacall’s cigarette-through-syrup baritone if you’re Jaguar’s current demographic; Marianne Faithfull’s cigarette-forget-the-damned-filter rasp if you’re who they’re now after (if you’re Gen XYZ and you happen to be reading this, you may need to YouTube Broken English). Either could make you melt just by asking you to pass the salt.

And Jaguar’s new F-TYPE is indeed aurally pleasing (what, you thought I was talking about something else?). Sometimes it moans, sometimes it purrs and, foot to the floor, it will roar just the like the leaping feline stenciled into its steering wheel. Peg it and it will bark an angry ignition cut-out every time you upshift. Back off and it cackles like the mad man/woman you swore you wouldn’t take home last night. This is a bad car with bad intentions. Let it move in and you’ll be writing bad cheques long after the lease payments are over. Just starting the damned thing sounds like an invitation to delinquency.

And you don’t need to fork over $100,900 for the top-of-the-line V8 S — or even the $88,900 mandated for the V6 S — for this acoustic insolence. Even the cheapest F-TYPE, the $76,900 base V6, will soon have you driving on the wrong side of the tracks looking for trouble. Indeed, the biggest surprise about the F-TYPE isn’t that it is stunningly beautiful (how can one, after all his success, expect anything less from Ian Callum?) or that it handles with serene aplomb (see the previous comment and then attribute it to chief vehicle integrity engineer, Mike Cross), but that the base model, the 340 horsepower that virtually every autojounrnalist had already dismissed as being Plain Jane, is as intoxicating as its stable mates. As long as you tick off the box for the optional Active Exhaust system (standard on the S and V8 S and $1,650 on the base V6), there’s really no pressing need to move up the F-TYPE’s model lineup.

It turns out, for instance, that 340 horsepower is plenty enough to motivate the F-TYPE’s 1,597 kilograms. The official acceleration figure for the base 3.0-litre V6 is 5.1 seconds to 100 kilometres an hour, not exactly supercar-like figures. And yet, there’s never a situation where even the base model is anything but exhilarating. Perhaps I’m just so shallow that I’m unduly influenced by guttural exhaust notes, but the F-TYPE V6 feels fast in a way other base model sports cars — think Porsche Boxster by way of comparison — aren’t. 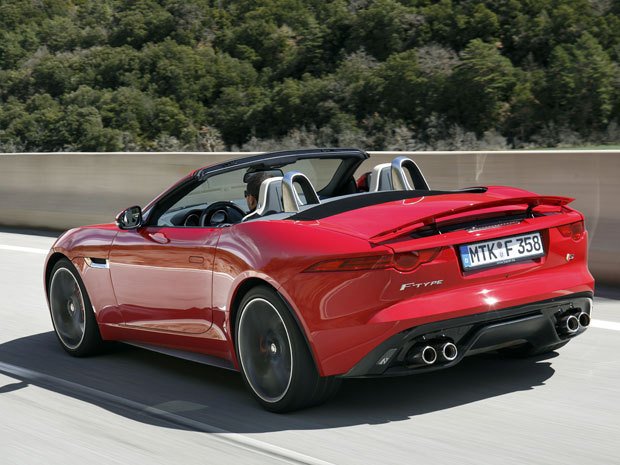 I suppose one could move up to the equally evocative V6 S model, but the attraction, surprisingly, won’t be its extra 40 ponies. Yes, it’s quicker (as much for its shorter 3.31:1 rear axle ratio as for its added horsepower) and, truth be told, its bark just a little more insistent, but the base V6 is all the motor the F-TYPE needs (again, cue comparisons to Porsche’s Boxster). Instead, the reason to risk getting into even more trouble are all chassis related, the F-TYPE S gaining Jaguar’s Adaptive Dynamics variable damping suspension, a mechanical limited slip differential and 19-inch wheels.

And, indeed, there’s a bit more bite to the V6 S’ front grip, a little less roll to its suspenders and a little more brake to its discs (all three F-TYPEs share the same four-piston front calipers, but each upgrade gets larger diameter discs). The V6 S was the only F-TYPE designated for our track testing and with good reason; flung around the Circuito de Navarra, the mid-step Jaguar was as sure-footed and speedy as many of its supposedly more performance-oriented competitors. This is no warmed-over XK, the F-TYPE’s new, super-stiff all-aluminum frame, some seriously oversized steering knuckles and a near-perfect 50:50 weight distribution see to that.

Feedback through the steering wheel is almost magically sensitive (cue even more Porsche comparisons, this time positive) thanks to massive steering knuckles (more stiffness) and hydraulic — rather than electric — power steering boost (more sensitivity). There’s not a hint of laziness to the F-TYPE’s steering, much appreciated when you’re trying to precisely clip Navarra’s difficult decreasing-radius apexes.

The other reason you may decide to move up to the S is the availability of Jaguar’s optional Configurable Dynamics package which, among other things, allow you to customize the F-TYPE’s throttle response, steering effort and suspension firmness independently. Thus, you can get the F-TYPE’s sharpest throttle and the quickest steering in Jaguar’s history and yet have the surprisingly coddling ride of the softer suspension choice at the same time.

A move up to the F-TYPE V8 S, of course, brings much more power. Substantially more. And yet, while it offers the same adaptive suspension and customizable Configurable Dynamics as the V6 S, it’s not quite as imperturbable. The wider 255/35ZR20 and 295/30ZR20 tires (the standard model has 18s and the V6 S rides on 19s) may offer more grip, but their lower profiles, not to mention the greater mass of the larger wheel/tire combo, mean the more expensive V8 does not ride quite as well as the lesser models.

As well, even though the V8 S still approximates that 50:50 weight distribution attributed to the lesser models, said weight is polarized at the extreme ends of the car, the front heavier because of the larger engine and the rear more lardy as a result of the more sophisticated computer-controlled electronic differential. The V8’s steering feels just a tad heavier and less inclined to dive for apexes than the V6 S. Driven in isolation, the F-TYPE V8 S feels sportier than any Jaguar in recent memory. But if you want the ultimate Jaguar backroad bandit, then lose a couple of pistons to gain a little chassis precision. 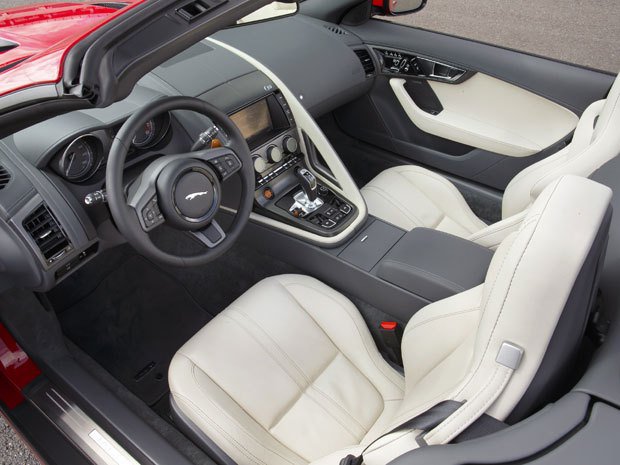 Of course, the V8 S offers incomparable grunt. Its 495 horsepower, and more importantly, the supercharged 5.0-litre V8’s 460 pound-feet of torque (all delivered by 2,500 rpm by the way), power the lightweight F so effortlessly that one wonders if the V6’s drama is worth it. Indeed, hooning about through the same alpine-like passes as we tested earlier in the day in the V6, the V8 was all pace with grace compared with the frenetic assault that the six continually exhorts.

But it still doesn’t sound as good as the V6. Indeed, while it’s doubtful that the F-TYPE will ever earn the singularly iconic status that is now the E-Type’s legend, the fact that they’ve managed to make music out of an engine format that usually sounds as flatulent as an out-of-tune tuba is no small feat. That Jaguar has made such a pedestrian engine as sonorous as the very best of the classic formats — inline sixes, V8s and, yes I know you think I am exaggerating, even the mighty V12 — is quite amazing. And anyone thinking that I am aggrandizing the thrall of those simple combustive concussions just hasn’t heard F-TYPE V6 at full chat.

Give your ears a treat and listen to the F-TYPE (both the V6 and V8) in the video below. You’ll see what all the fuss is about.

Not much to complain about in F-TYPE …

So, Jaguar’s new F-TYPE is a rorty little beast. Good for them, it’s about time that Jaguar put a little sport back in its sports cars.

But, if the F-TYPE captures a little of the E-Type’s insouciance, can it too still retain at least some of the refinement for which the Big Cat is now famous?

Mostly, yes would be the answer. For one thing, the cabin is roomier than you might expect. Jaguar is being deliberately vague about what the F-TYPE competes with, citing both the Boxster and the 911 as benchmarks when it is really unlike either. Roomier inside than the former, it lacks the latter’s vestigial rear seats.

It’s also a “warmer” cabin than either of the Porches, if not quite the leather armchair in front of a glorious roaring campfire that is an XJ then at least a nice La-Z-Boy with a warm duvet. The leather work is excellent, there’s a cockpit feel to the layout and details, like the row of toggle-like switches below the audio system, a welcome classic touch. If you opt for either of the S models — V6 or V8 — you also get a few anodized aluminum bits like the starter button and the steering wheel mounted gearshift paddles.

I was too busy blipping the throttle and barking through the gears to really notice, but my driving partner, the chief automotive editor of Canada’s leading metrosexual men’s fashion magazine, was all agog about “design flourish.” I don’t know what he meant either, but they are cute.

I did, however, like the little Jaguar stenciled into each door handle. Like a few other upper end sports cars looking for the ultimate in aerodynamics (or truthfully, just a little more Geewhiz-will-ya-look-at-that-Martha), the F-TYPE’s door openers sit flush with the body when not in use. Punch the key fob and they pop out and there, nicely emblazoned for all to see, is yet another reminder, just in case you forgot, that you’re driving a Jaguar.

It’s a nice touch, especially considering that this is supposed to be Jag’s budget model. Pretty much my entire review of the F-TYPE has been positive until now. But there is one flaw, its severity dependent on your intended usage.

The trunk, you see, is just too small. Small as in not much bigger than a Miata’s. Small as in two pieces of carry on luggage will not fit back there. And you can forget getting a full set of Pings to the country club; if you haven’t paid the annual bag storage fee, you ain’t going golfing. Part of the reason is that the soft top takes up some space when retracted. And, to make the rear aluminum structure as rigid as the new F-TYPE’s handling portfolio required, more substantial bracing was needed to keep the wheels well aligned. None of which will matter when she-who-shops-professionally finds out that her favourite sporting activity will have to be seriously curtailed. Two can travel comfortably for weekend sojourns in the F-TYPE as long as they are of the pack-your-bikini-and-toothbrush variety.

As serious limitation as it may be, you’ll find precious little else not to like about the newest Jag.