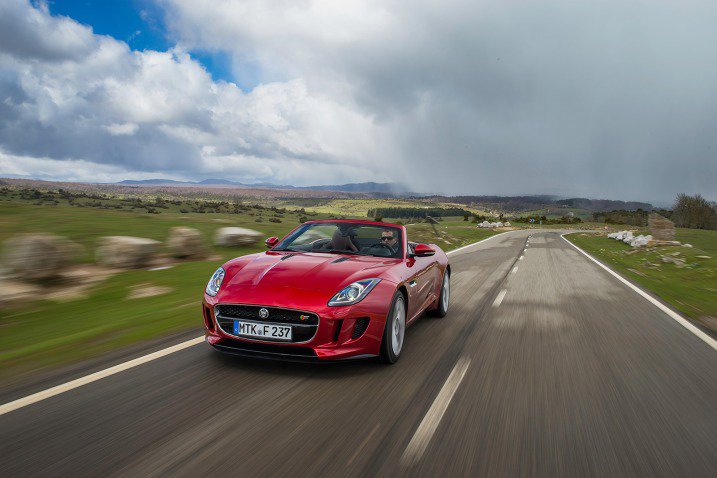 It only takes 200 milliseconds for the 2014 Jaguar F-TYPE V8S to make you rethink your definition of bonkers. This is exactly the time required for the car’s active differential to achieve full engagement, precisely distributing all 460 pound-feet of torque between its rear wheels and leaving two perfect black stripes and a huge plume of blue smoke behind.

It’s bonkers, all right. But it’s also the most civilized powerslide to ever leave rubber on tarmac. And that’s exactly how Jaguar wants it.

We flew to Spain to sample every version of Jag’s first true sports car in nearly 40 years, both in slow, relaxed turns and, well, otherwise.

The all-new 2014 Jaguar F-TYPE two-seater is offered in three supercharged, direct-injected flavors: base V6 with 340 horsepower and 332 lb-ft of torque; upgraded V6S with 380 hp and 339 lb-ft of torque; and top-of-the-line V8S. It’s the latter’s 495-hp V8 that’s known for striping Spanish switchbacks.

All three come with ZF’s eight-speed automatic transmission, which avails itself as both the world’s most versatile and effective automatic transmission occupying the powertrain of everything from this new Jag to Ram’s 1500-series pickup. Here its calibration is perhaps the sweetest yet, as torque converter slip is used only on launch, which eliminates disconnect between the engine and wheels when driving hard: a trait no true sports car should exhibit.

The upgraded S models of the F-TYPE both come with two-mode variable dampers, which are controlled manually along with other functions (throttle calibration, shift speed, exhaust note and steering weight) using the "Dynamic mode" switch on the center console.

Back to those powerslides for a minute. Because it’s here that S model F-TYPEs distinguish themselves through a smooth, controllable breakaway of rear grip.

In the V8S, it’s largely due to the active differential’s clever calibration, which utilizes a "forward-looking" strategy to prepare its clutch pack for whatever situation it’s about to encounter, whether a relaxed turn into the valet lot or a flamboyant, tire-smoking momentum drift on a Spanish mountain road. The large grace period between the loss of adhesion and loss of control is a blessing for both novices and pros alike.

V6S models are equipped with a mechanical limited-slip that’s slightly less sophisticated, while base V6 models have an open differential.

Though its steering is precise and quick to effect directional changes, front grip limits weren’t as obvious as we’d prefer in every situation. Still, go fast enough to question front grip and you’re going sufficiently quick in any F-TYPE.

Upshifts are instant and accompanied by a muted thrum from either engine as the next gear is banged home. Though there are wheel-mounted paddles, we preferred the shifter’s stationary location and light, direct action. The transmission will hold gears at redline in dynamic mode, and downshifts are rev-matched. The ZF box gives up nothing to the best dual-clutch units in either performance or comfort.

And though the V8 is the engine that will define the 2014 Jaguar F-TYPE, it’s not requisite for rewarding driving. Lapping the V6S on a track proved it to be the better partner if power isn’t your primary concern. No F-TYPE is light, but the base V6 is 150 pounds lighter than the V8: a noticeable margin during turn-in and transitions.

Structurally there’s no reason to question the F-TYPE’s missing roof. Its chassis is solid and stable, and the notion of cowl shake is as laughable as the V8S’s 3,671 pounds of road-crushing curb weight. 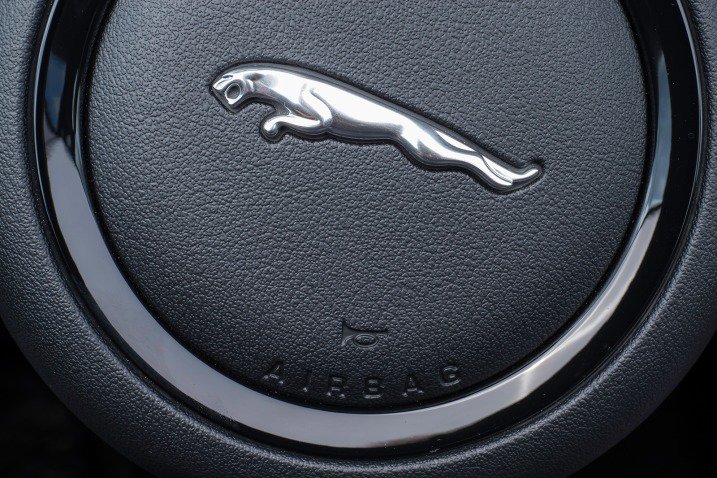 Jaguar claims the V8S will hit 60 in 4.2 seconds, followed by the V6S and V6 in 4.8 and 5.1 seconds, respectively. The last Porsche 911 Carrera S Cabriolet we tested achieved the milestone in (you guessed it) 4.2 seconds.

Ironically, only the V6S model is offered with launch control. The V8S, according to Jaguar officials, makes enough torque just off idle to launch most effectively from that engine speed. Wheelspin management is left to the traction control system and electronic differential.

Combined fuel economy, thanks partially to an engine stop-start feature is estimated at 26 mpg combined for the V8S, which seems generous. V6 models, however, will do slightly better.

Jaguar engineers benchmarked Porsche’s 911 during the F-TYPE’s development, along with Audi’s R8 and the 2012 Aston Martin Vantage V8. But it’s clear in the finished product that Jag aimed not only at these car’s feedback and performance numbers, but at the more subtle targets they set in refinement and flexibility, which are undeniably harder to hit.

Possibly the best example of that flexibility is the F-TYPE’s active exhaust system. It’s used on both S models and was settled on after testing 85 different setups during development. In other words, what you hear behind the wheel of the F-TYPE is no accident.

The V6 is one of the meanest-sounding engines of its type in the world, while the V8’s wail is at once loud, pleasant and distinct. This isn’t just engine sound. This is an ear-shredding symphony of internal combustion that produces equal parts road presence and character. Yet if you don’t want it, it’s easily dismissed: a sign that the luxury side of this topless cat is as much a part of its personality as is its performance. 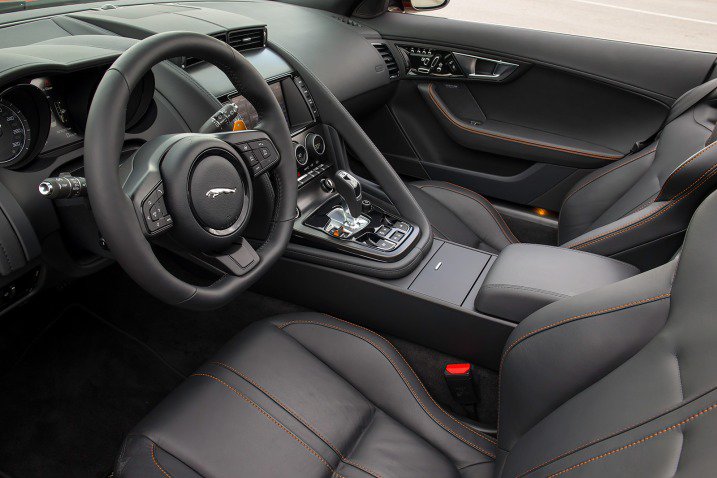 Both S models borrow their seats from the 2013 Jaguar XKR-S, and all models feature an interior that’s as thoroughly modern and attractive as any of its rivals. There’s a knob for each climate zone that doubles as a seat heater control. A high-resolution touchscreen interface displays navigation, audio and an optional configurable dynamics program that allows drivers to customize engine, steering and suspension calibrations.

The three-spoke wheel is small, thick and wrapped with leather or Alcantara. Gauges are large and clear, but the tachometer is offset to the right. Mounting it in the middle might have sent a clearer message about the car’s focus.

The power-retractable soft top will disappear or deploy in 12 seconds at speeds up to 30 mph. We drove with it down in near-freezing temperatures and were comfortable at freeway speeds. And though the F-TYPE’s trunk is small, the top doesn’t impinge on trunk space when it’s retracted.

Whether the F-TYPE has the broad range of dynamic merits available in Porsche’s 911 isn’t really the question. Possibly it doesn’t, but it matters little. Jaguar has something unique with the F-TYPE, a machine that manages high levels of driver engagement while satisfying the emotional demands a car this costly must. That it’s topless is only a bonus.

It is attractive and it is fast. It makes sounds that rival the best from Italy. And should you choose to, it will stripe a Spanish switchback like nobody’s business.