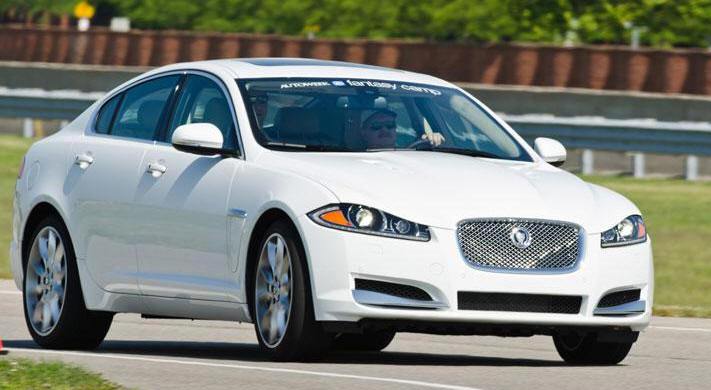 At third-annual AutoWeek/ZF Fanasy Camp, one car had the rest of the pack licked.

The lawn shone green under the European, Asian and American cars twinkling in the evening light as the campers strolled among them, opening and closing doors, inspecting sheetmetal and chatting with Autoweek editors. They would not hit the track until the next day, but notebooks were deployed and judging had begun.

The competition transpires over three categories, with Autoweek/ZF Fantasy Campers judging every car on a variety of criteria encompassing interior, exterior and drive characteristics. This year, the field looked as solid as ever, ensuring a close fight.

Right out of the gates, the Audis showed well in the interior category, the A7’s spectacular cabin just squeaking past the A6’s almost identical one by a single percentage point. The Cadillac CTS-V then took on the A7 in the exterior department, its angular Art & Design styling ethos duking it out with the flowing lines of the Audi. But none of those cars stole the win. Fantasy Campers instead handed top honors for interior and exterior execution to the Jaguar XF.

Switching from static competition to the track exercises, the group of contenders shifted slightly. The Audis dropped out of a mix that included the CTS-V, the XF, the Chrysler 300 SRT8 and the BMW 550i xDrive. Through the ride-and-handling course, down the high-speed and hard-braking straight-line track, a wet-surface car-control course and the tight gymkhana and wider-open auto-cross courses, the Caddy bested the rest, its supercharged V8 and magnetic ride-control suspension outgunning everything else. The Jag proved pesky, however, coming in just 0.3 percentage point back.

In the end, with the points weighted more heavily toward the driving portion, the Jag ran away with the overall win, the Caddy falling 3.5 percentage points back and the 550i and the A7 rounding out the top four.

INTERIOR: For us, the nod for the best interior would have gone to one of the Audis, which we adore. We do love the Jaguar XF’S cabin, with its trick vents and shift dial, but the slow reaction of the center touch screen knocks it out of the top tier for us. Campers didn’t seem to mind, with one saying, “The Jag has easily the most attractive interior,” while the A7’s “is and looks functional—and that is not a compliment.”

EXTERIOR: This year’s field may have had the best collection yet of fabulous exteriors, but it also made for the widest margin of victory from campers’ point of view. The Jag cuts a lovely silhouette, enough to lure almost every eye its way. The A7 and the CTS-V Could barely keep up, but one camper said the A7 “looks fast when parked.” another said the CTS-V’S “distinctive Cadillac looks mean business.”

DRIVING: The Cadillac wowed the group on track and easily took top honors, but the Jaguar evoked the most surprise. Few campers seemed to expect the car to turn a quick hot lap, and to a person they noted how much they enjoyed its drive character. “The handling is what surprised me,” said one camper, echoing the group. “I thought it would be closer to the Hyundai and the Mercedes when, instead, it can keep up with the big boys.”

OVERALL: Germans took the win overall the last two years, but that streak ends this year with the Jaguar XF’s decisive victory over the Cadillac CTS-V and the BMW 550i xDrive. Congrats to the Jaguar.