Seeing the Jaguar F-TYPE tells you much of what you need to know. It’s British. It’s a drop-top. It’s beautiful. Now we’ve got full details from Jaguar who reveal the latest Jaguar comes with a mixture of three engines, including a line-topping F-TYPE V8 S with a potent version of Jaguar’s 5.0-liter V8 engines putting out 495 horsepower.

Give a company that’s famous for building the world’s cheapest car one of the most luxurious brands and they do a surprisingly good job of giving us exactly what we want.

Let’s cut to the good stuff first and work our way back and ignore that Lana Del Rey premiered it with a song. The two-seater is built on the latest version of Jaguar’s aluminum platform, giving it a curb weight that starts at 3,521 pounds. Unlike its GT big brother — the refined Jaguar XK — Jaguar says the F-TYPE is an honest sports car.

Backing up the claim is a trio of engines with sporting intentions. The base mill is the company’s 3.0-liter supercharged V6 producing 340 or 380 horsepower and 332 lb-ft or 339 lb-ft of torque, in regular and S trim, respectively.

Going up to the V8 S you’re invited into your life the growling Jaaaaaaaaaag 5.0-liter V8, also supercharged. It can produce more power, but here it’s limited to 495 horsepower and 460 lb-ft of torque. Performance varies accordingly, with the base model hitting 60 in a reasonable 5.1 seconds, followed by 4.8 seconds for the V6 S and just 4.2 seconds for the V8 S. Top speed also varies, electrically, from 161 mph up to 186 mph.

Countering a bit of the old British motoring feel, the only transmission is an eight-speed automatic with paddles. Faster than humans? Probably. As satisfying? Probably not. The F-TYPE S gets a mechanical limited-slip while the V8 S comes fitted with an active electronic controlled one.

The attractive wide stance comes from a wider rear track than front, all sitting atop double-wishbone aluminum suspensions at both ends. Mixed with Jaguar’s dynamic suspension dampening, both S models should be as easy to drive fast as they are to cruise. 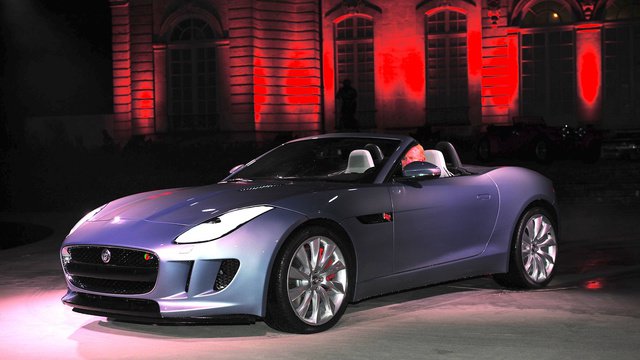