This cool, cool kitty is the first two-seat Jaguar launched in 50 years

The F-TYPE is the latest in a long and distinguished line of “Types” from the Leaping Cat: C-Type, D-Type and E-Type being the predecessors, any one of which holds a revered place on the wish list of true collector’s must-have sports cars. Now, for the first time in 50 years, Jaguar is introducing a new two-seater: the F-TYPE. It has some very big shoes — or rather wheel wells — to fill.

Rather than dribble out models and powertrains over several years as some makers do (cough — Porsche — cough), Jaguar is making three powertrains available right at launch: two V6s and a nearly 500-hp V8. All three engines are supercharged and all three come mated to a snappy ZF eight-speed automatic that routes power and torque to the rear wheels. There are also limited-slip differentials available with the two more powerful drivetrains.

All three models come only in the single, svelte, lithesome convertible body style. While there is a coupe in the product plan, it won’t be out for — as near as we can tell — two years (don’t hold us to that).

Unless you’re coming directly out of a Porsche Boxster S, you will not be disappointed. And even then you might not be disappointed. By recent Jaguar standards this is a light, nimble and tossable sports car. That’s by recent Jaguar standards. By most “sports car” purist metrics this car might be classified more on the sporty-GT side of things. The villain is weight. Despite aluminum everything, the F-TYPE tips the scales starting at 3,521 pounds to start and porks up to 3,671. if we’re going to compare it to the true sports cars that Jag insists the F-TYPE is, a Boxster weighs just 2,888 pounds (2,954 with PDK). That’s a 633-pound difference. A 911 Cabriolet is 3,197 pounds — a 324-pound difference.

So it’s a little weightier than it would be if it wasn’t so luxurious. And, being a Jaguar, it errs on the side of comfort. That’s not bad for Jaguar owners, who expect the stuff. Engineers were very proud of the steering and it is fast and accurate here. It just manages to muffle a little bit more of the feel than we would have expected in a sports car. That’s not to say a car needs bump steer to feel sporty, just that more feel is absorbed in the hydraulic steering than we’d expect from a sports car.

None of this was really what you’d call a problem on the track or during two days of hightailing it over the sweeping mountain roads on which we drove a series of F-TYPEs. First of all, the car is powerful in every configuration. Never did we feel it was lacking in this regard, even in the base model. Jaguar very carefully put us in the least-powerful version first, the 340-hp, 332-lb-ft V6. From the first stomp of the throttle and the first brap of its somewhat metallic exhaust (you can make it more bossa nova with a button that controls the muffler baffle), it felt more than adequate. Jag quotes a 0-60 time with this engine as 5.1 seconds. That will take care of most of your drag-racing needs.

On the fast sweepers and tight third-gear switchbacks of the Circuito de Navarro in Spain we piloted the 380-hp 339-lb-ft V6S. This was also more than enough power for the task. The eight-speed automatic shifted just as quickly as we asked it to, either by blipping the shift lever on the transmission hump or by pulling back on the steering wheel-mounted paddles. The transmission was smooth, fast and efficient. No problems there. At speed around the track we noticed very little body roll and almost no transitional handling problems as weight moved almost imperceptibly from side to side as we circled the course. It was fun to drive, as you’ll see soon enough on a video we shot that day.

Traction control could be set to allow a little slip or could be switched off entirely, allowing donuts, powerslides or full-on drifting, depending on your skill or mood on any given day. Getting the back end to step out took some doing; it tends to want to stay back there where it belongs, but once you do break it loose, you can have great fun looping it around.

Our final F-TYPE drive was in the mighty 495-hp 460-lb-ft V8 and once you totally disable the stability control on and fully engage the active rear diff you can lay down as much rubber as you want all day long. And we did. The Spanish EPA is still clearing out the tire smoke from one launch we managed for the camera. Jag quotes a 0-60 time for the V8 of 4.2 seconds, which sure seemed accurate. 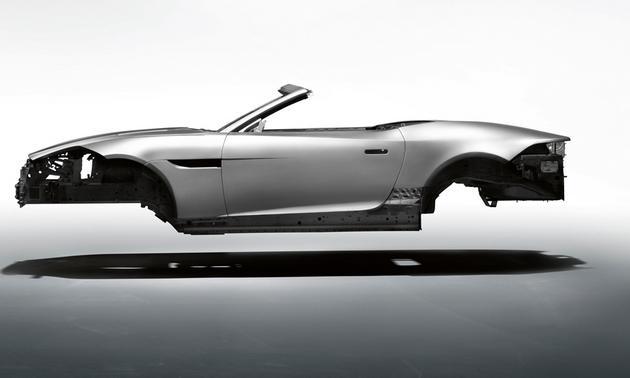 Is it sporty enough? That depends on your perspective. If your idea of a sports car is a Cayman R, then you may find that the F-TYPE is more comfortable and luxurious than that, perhaps at the expense of lightweight tossability and quick-flicking turn-in. However, by the standards of Jaguars which, admittedly, have wandered over to the softer side of performance in the last half-century, then this will, indeed, be sporty. You decide. It certainly looks lovely.

On Sale: End of May