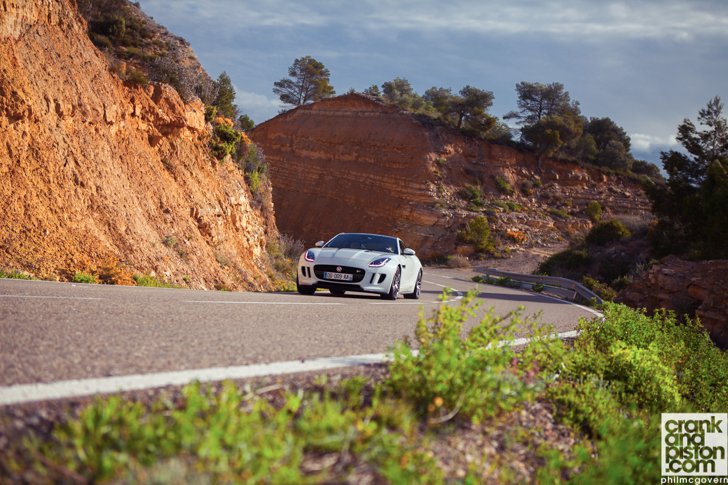 You have to wind the clock back to the very early 1980s to see the beginning of this project. Back then Jaguar was a very different company to the one we see today. It was struggling to get up and running after the failed British Leyland exercise, and seemingly unable to pull together a product line that could honour the company’s history, but at the same time move forward in the direction fans and the buying public wanted Jaguar to go. The first effort was quietly ushered around internally during the period of Ford ownership, but was subsequently whipped away from Jaguar and given to stablemates Aston Martin to become the achingly pretty DB7.

It wasn’t until the North American International Auto Show of 2000 when Jaguar pulled the silks back from the next public version of the much-vaunted F-TYPE. Although it was only a visual concept and never destined for production, there was a firm belief that Jaguar was getting closer to actually making it happen. But sadly, history repeated itself. After numerous clinics, design reviews and feasibility studies the project was put back on ice thanks to an ever-increasing pressure to divert resources to the development of a diesel power train for other models. The world – myself included – cast a disappointed gaze across the brand, worried that their core values and product offerings were just not being put into the hands of the public. Jaguar needed the F-TYPE and quick, or the future would be very bleak.

But it would be more than a decade before our wish became reality. Fast forward to the 2011 Frankfurt Motorshow and Jaguar, this time on a product roll and with an ownership and internal belief overhaul, finally looked ready to actually rock and roll. Fans sat glued to their computer screens soaking in the utterly stunning Jaguar C-X16 concept.

Wait, concept? Not again! However, this time the car looked right, almost production ready and the management was bullish in its public approach. Nothing was confirmed, but surely it was written in the stars? The car was coming and the name F-TYPE would be slapped on the back. Right?

Right. Back to now, and the side of the road in Barcelona. The world and I have been eagerly awaiting the F-TYPE, and now is the time. Within the next two hours I’ll be head down and giving it full chat across the Spanish countryside. Please, PLEASE be good.

It’s a little bit of a downer then, that as the plane lines up for final descent into Lleida, a quick hop from Barcelona, monsoon season has arrived over north-east Spain. Wet and greasy surfaces are the order of the day; conditions that separate the men from the boys and very quickly highlight car engineering failures. 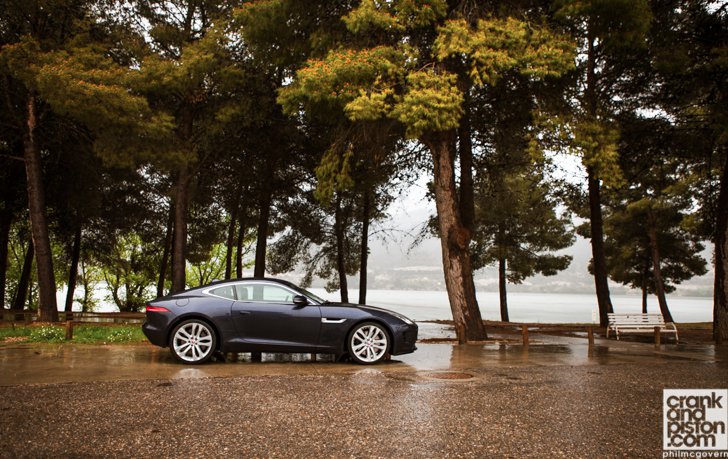 We have the pleasure of two of the three models currently on the market: the V6 S and the ridiculous R, complete with a 550hp, 502lb ft supercharged V8. Numbers aside, the V8 R has all the makings of a real street fighter car.

But it’s the V6 S that’s my first steed for the run to our first stop, the better part of 170km away across country. Immediately, it’s clear what a great set up the S has. It’s the sort of car that I find truly fascinating, in that it’s not ballistic but it is fast enough for almost all situations. Its lower kerb weight compared with the R and mechanical diff make it a simple, engaging and fun handling piece of kit. It’s always interesting to drive a car running less power than the chassis is capable of handling, and oddly it reminds me of the Toyota GT86 I spend so much time in.

The route to Aragon is a ribbon of hedonism. Abrasive asphalt, lots of cambers, the kind of thing at which a motorcyclist would wet himself. It’s an eclectic menu of fast, flowing roads, left-right flik-flaks and tight corners, a full workout for the F-TYPE, and it excels, even in the streaming wet. There’s great chassis feel, deft steering and a soundtrack to die for. When you depress the tactile loud pedal, it emits one of the most visceral and raucous sounds this side of a Ferrari. It’s so intoxicating in fact, it doesn’t take me long to work out the amount of throttle input the car needs to set those firecrackers off. Go hard and a wail reminiscent of the Cosworth DFV F1 engine takes over. It’s hard-edged and utterly addictive. I’ve no idea what the original brief was given to the exhaust team, but if “bring out the inner 12-year-old” was the title of the project, then they have clearly nailed it. 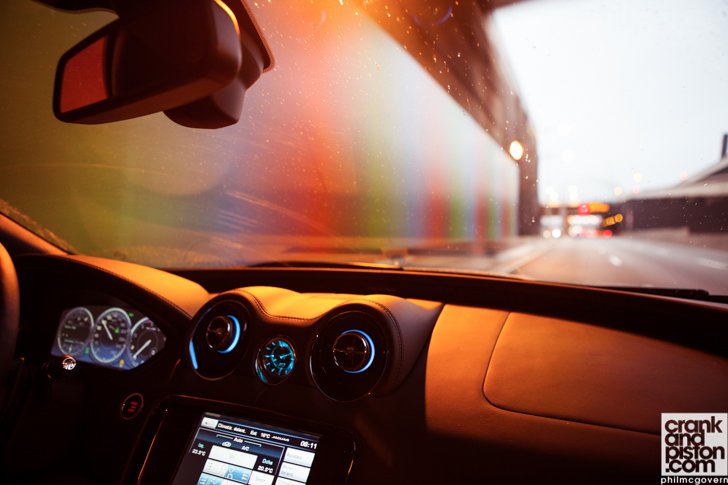 After an hour or so behind the wheel and more than a couple of water-induced exciting moments, my driving partner (Mr Kevin Hackett) and I find a dry spot under the trees to consume nicotine and discuss. It’s early days – conditions are terrible, and we’ve only driven one engine choice, but my God, the early signs are good. So, so good. After so many years of yearning, has Jaguar finally succeeded in pooling all of its talents into the car the company we all love deserves? I’m properly excited, and I’ve yet to step foot inside the V8-powered R.

Ah the V8… what of the V8. We’d had a riot in the V6 S nailing the throttle and soaking in the dynamics that thankfully don’t reek of race car for the road and now we have what on paper is the same car fitted with what can only be described as a hot-rod power plant at our disposal.

The V8 is a sizeable step up from the V6S in terms of raw numbers, both price and power-related and immediately feels like a totally different car to the V6. Heavier steering and considerably meatier inputs are required. We edge out of town slowly trying our level best not to attract any attention and point it in the direction of the N420, a main highway that runs for 800km through Spain. Kevin and I had already made our minds up – the V6 S is a superb piece of kit and clearly the car of choice in the current line-up. However, after five minutes and the first openings in traffic, all of that goes out the window. Something tells me this section of the drive is going to be one for the memory archives.

The R is supercar fast and in another league altogether from the V6. Its soundtrack is different, deeper, more menacing and just as addictive, and it’s stiffer than either the six-cylinder models or its convertible brother. It feels and sounds utterly mental. Which, of course, means it’s utterly brilliant.

For the rest of the day I fire this hot rod up and down roads that previously only existed in computer games and Google Earth-driven dreams. Every so often I stop, to swap seats with my passenger and exchange thoughts, or simply to calm things down while the car’s brakes and quad exhausts tick and hiss away. We’re in agreement – while the V6 S is a wonderful machine, this R model is on another level entirely. 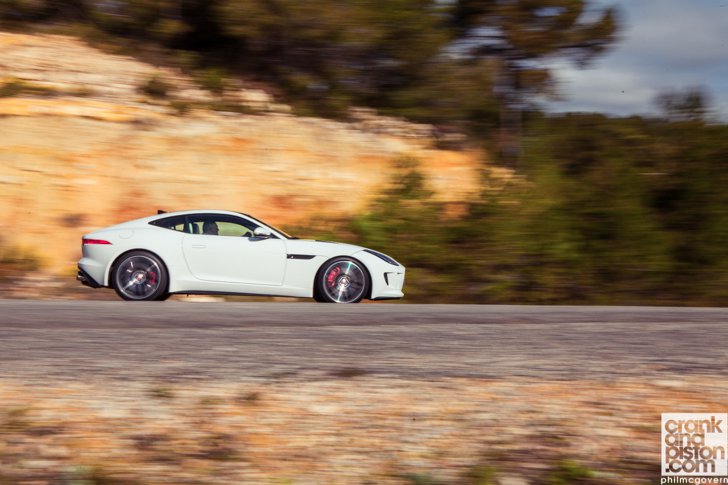 Forget the facts and figures for a moment. What the world has been waiting for, or at least expecting is a car with stunning looks, capability and the skills to take the game to Porsche 911 and finally it’s here. Monopolies are boring affairs and the 911 has had the segment stitched up for way to long. You don’t have to take my word for it, but I’m a Porsche guy, to the point of repeat ownership. I’m a Jag fan too, ever since my late Grand Father introduced me to the brand but I love Stuttgart’s finest. And yet after my spirited cross-country thrash in the F-TYPE Coupe R, I find myself blurting out “the only thing that comes close to this is a GT3”. It is all sounding cliché, yet it is the honest truth.

What impresses, apart from the heavy rock soundtrack and the sheer pace of the thing, is the way it grips the road surfaces, inspiring huge levels of confidence. Turn in is sharp and loading the car up pre-corner with a quick dab on the wonderful brakes reaps dividends with smooth and progressive oversteer, even with the electronic nannies keeping watch. Jaguar has dialed in just enough playfulness for you to feel like a driving genius when in reality there’s a bit of help going on. But you can tailor the car’s handling and engine responsiveness using extensive personalisation menus on the infotainment screen. Tweak the diff, steering, suspension and motor to your liking, although from experience, this is another type of technology that isn’t really needed. I always question why a Lamborghini has a sport button, or an AMG carries another button to unleash AMG. Why not just deliver a car that does what it’s capable of and loose the buttons. Personalisation on occasion can be an offering that just isn’t needed.

As an example, for hugely fast progress on these Spanish switchbacks, you don’t actually need it on hardcore track settings. On the contrary, it feels perfectly poised in its default normal mode, even with nanny state traction control in full effect. So good is the chassis and mechanical set-up that the F-TYPE Coupe is never uncomfortable or jarring, no matter how you set it up. Head down, Ridge Racer visor on, the Coupe just decimates mileage with aplomb.

As I sit parked up on the side of the road soaking in the stunning visuals of the F-TYPE, I’m convinced that the Coupe is as good as the F-TYPE needs to be. Both models that I’ve driven in Spain are sensational in every way. Jaguar has thrown everything it has at this car, turned itself inside out in order to present to the world the very best of what it’s capable. This car is the public vision of all the company’s talents and right now, I’m pretty sure it can’t do better than this. That statement is one I’ve wanted to say for well over a decade, and thankfully at long last, I finally can.