To rouse its sports-car soul from a 40-year nap, Jaguar set its sights on Porsche’s 911 Carrera cabriolet, the crown prince of roadster speed and agility. With the 911 playing Draco in this pageant, Jaguar’s Harry Potter dare not be a pussyfoot.

It’s not. The F-TYPE revealed its cunning on the Navarra Circuit in Spain and while attacking the Pyrenean foothills. After living with the comeback cat for a couple of days, we are certain this is not the reprise of your uncle’s vintage sports car or an abridged version of the Jaguar cruisers battling the luxury German juggernaut. Rather, the F-TYPE is a feline bred with a wild streak and a feral yearning to meet or beat Porsche’s best moves.

Aesthetically, the F bears no family resemblance to Jaguar’s last great sports car, the E-type, allegedly endorsed by Enzo Ferrari as the most beautiful car ever created. The 2014 F looks more like a son of the C-type, the Jaguar racer that won LeMans in 1953. When you top a large front-mounted vee engine with a supercharger and intercooler, then add a layer of pedestrian protection, the result is chunky proportions. The high hood and beltline make the F-TYPE look like it’s wearing a turtleneck.

The cockpit respects both trendy and traditional design views. A touch screen flanked by eight buttons provides a full menu of navigation, car setup, and communication and entertainment programs. Substantial knobs and toggles operate the climate-control system. The polished and painted metal and the double-stitched yard goods that line the F-TYPE are tastefully finished. Seats pirated from the XKR-S hug you in all the right places.

Soothing ride motions and polite manners, two traditional Jaguar virtues, are absent here. The F-TYPE’s suspension is so taut and the body structure so rigid that every misaligned grain of pavement sends notice to the cabin, making this the roughest-riding Jaguar ever and a roadster ready for track day. There is no roll in the bends, no brake dive, and not a hint of squat during a full-bore leap forward. Jaguar’s earnest intention is confirmed by the lack of Comfort or Normal settings for the F’s adaptive dampers. This Porsche in a cat suit pounces on apexes and keeps all paws planted.

Jag engineers resisted the move to electrically assisted power steering, instilling the F-TYPE’s fat-rimmed, leather-wrapped wheel with a slack-free, on-center connection, a useful rise in effort with increasing lock, and a ratio quick enough to deliver agile cornering response. Unfortunately, they neglected to finish the job with feedback. When the front end begins to slide at the adhesion limit, word of what’s going on at the tire patches arrives through the seat and to your ears, but no such message is telegraphed via the steering wheel. 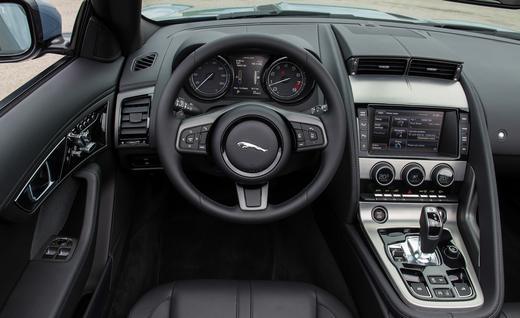 The F is endowed with more than enough firepower to fight any sports-car adversary in the $60,000-to-$100,000 range. The three available engines share core technology—DOHC variable-timing valvetrains, direct injection, Eaton supercharging, and charge-to-liquid intercooling. Ample torque is readily available from a couple thousand rpm, so the slightest right-toe twitch delivers serious thrust. The two 3.0-liter V-6s excel at raising a ruckus, especially in the active exhaust’s muffler-bypass mode. Upshifts rip with flatulence, and on overrun, their pipes snort like a berserk popcorn machine. The 495-hp, 5.0-liter V-8 goes about its business with more growl and less fuss.

The $12,000 step between the base F-TYPE and S model buys you 40 additional horsepower from the V-6 (achieved strictly through software), a slightly elevated fuel-cutoff rpm, and appropriate chassis upgrades: 19- instead of 18-inch wheels and tires, adaptive dampers, larger brakes, and a limited-slip differential. Spending the next $11,000 for the V-8 buys a seriously wild 495 horsepower, 20-inch wheels and tires, larger brakes, an electronically controlled limited-slip differential, and four pipes trumpeting the rumble. Without resorting to carbon-ceramic rotors or opposed-piston calipers, Jag engineers programmed the brakes to provide mush-free initial bite and deceleration almost perfectly proportional to pressure. You can trail-brake like a pro from your first test drive.

The base F delivers more than enough thrills for most folks. The V-6 S’s extra power is only noticeable at the top of the rev range, although the chassis upgrades should be considered mandatory for anyone with track-day intentions. The V-8 S is the predator lion of the F breed, always on the prowl for unsuspecting prey. 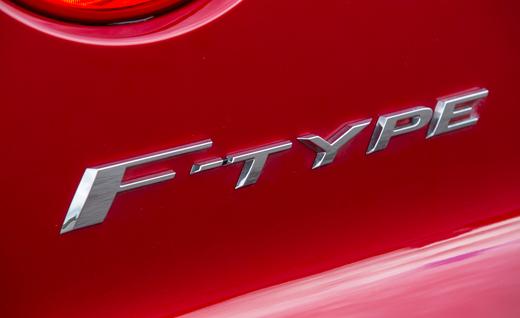 Jaguar committed one serious tactical error with the F-TYPE—saving a clutch pedal and stick shift for some unspecified future release. In compensation, extra effort was invested in making the eight-speed ZF automatic a truly willing friend in speed. Interestingly, for the new F-TYPE, Jaguar has ditched the rotating-knob gear selector used in the latest XJ and XK models in favor of a BMW-style electronic PRND shift lever with fore-and-aft, toggle-switch-like moves. It’s the centerpiece of a cockpit designed with simplicity and functionality as the only priorities. During hard driving, the gear in use is prominently displayed between the tach and speedometer, and a ratio change can be ordered through the steering-wheel paddles or by sliding the shifter to the left into the manual gate for tap-up, tap-down gear control. A detent switch below the accelerator can be mashed to command a multiple-gear downshift for passing spurts. To avoid an upshift with the revs crowding the redline, you press the pedal to, but not through, that detent. Snappy upshifts are glazed over by brief reductions in engine torque. Bottom line: A stick is always our preference, but enthusiasts should find the F’s perfectly executed gearchanges entirely satisfying. One gripe: We wish Jaguar had spent a few extra bucks to upgrade the shift paddles from molded plastic to cast metal.

Whether the F-TYPE smites the 911 in the heart or elbow will be revealed by the inevitable comparison test. Even so, Jaguar’s return to form will make life tougher for less-intense roadsters such as BMW’s Z4 and Mercedes-Benz’s SLK. And it makes life more interesting for sports-car fans blessed with a shopping list longer by one.