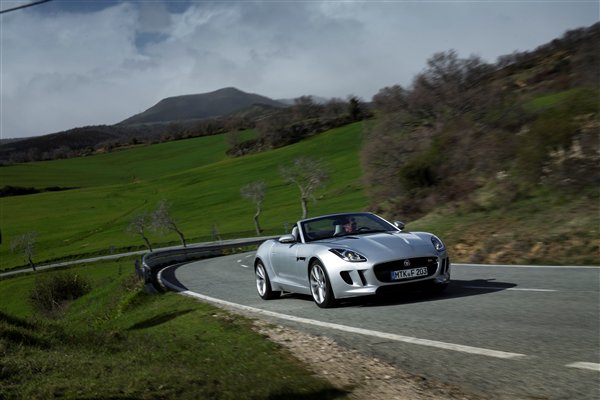 So what is it like to drive the all-new Jaguar F-TYPE, the car many of us have been salivating over since it was first rumored a couple years ago and especially since it first appeared in its taut aluminum skin at the 2012 Paris Motor Show this past September? The simple answer is good, very good and even better than that, referring in order to the three variants of the car, but before we get into the details, let us backtrack for a minute or two to talk about why Jaguar had the temerity to introduce an all-new, two-seat sports car in an era of economic decline and punishing fuel economy restrictions. Further, it might be instructive to explain why the small volume, Indian-owned British brand decided to expend a significant amount of cash and intellectual capital to develop a vehicle destined to compete in a segment that represents some 0.6 percent of the world’s auto market.

Being Big in a Small Market

In total, the two-seat sports car market isn’t very big, and the "full-size" sports car market into which Jaguar has plunged the new F-TYPE is still smaller than that. Yet Steven de Ploey, Global Product Marketing Director at Jaguar Land Rover, told us "the F-TYPE is the most important Jaguar of the last 50 years." The reason? Image. For something like four decades, Jaguar has been capitalizing on the heritage and prestige that it derived from its legendary sports cars that included the XK120, C-Type, D-Type and glorious E-Type, while not actually having a credible two-seat sports car in its model line. Jaguar continued to successfully sell lovely sedans, coupes and GT cars, but no drop-top, two-seat performance car emerged from Coventry for a couple generations. Meanwhile, a company that used to sell nothing but two-seat sports cars and sport GTs – Porsche – launched a very well-accepted sport utility and, more to the point, a hot-selling four-door premium sedan, infringing on Land Rover Jaguar territory. And with its R8, Audi gained some valuable high-performance sports car cred that has given it new respect. So Jaguar executives decided it was high time they, too, re-joined the sports car fray.

3 Models for 3 Types of Drivers

One assumes they could have done so with one super-high performance model designed to prompt car magazine raves and provoke sweaty palms among the world’s 12-year-old boys. Instead Jaguar is on the verge of launching an all-new sports car with three very distinct versions, the goal obviously not only to provide a performance halo for its vaunted brand but also to actually sell some cars. Thus the newest Jaguar is offered in F-TYPE, F-TYPE S and F-TYPE V8 S versions, and after spending significant wheel-time in all three, we can report that each has its own virtues.

Certainly they share a great deal. For instance, the very stiff, aircraft-like aluminum body and chassis structure extends across the line, and except for some minor trim differences, all three variants offer the classical-yet-modern long-hood/short-deck sports car proportions. Faced with the largely thankless task of following the legendary E-Type, Jaguar Chief Designer Ian Callum’s team has penned a very attractive contemporary sports car. So if you opt for the $69,895 (with delivery) F-TYPE you will certainly get more visual bang for your buck than if you spend $92,895 on the F-TYPE V8 S. You can wow your buds by lowering the fabric-covered top at 30-mph or less in any one of the three, and/or scare them silly with each sub-model’s high – and predictable – cornering power.

Each Climbs Higher on the Evolutionary Scale

As was once the case with the late, lamented Sears catalog, you could look at the new F-TYPE lineup as a decision between good, better and best. The base F-TYPE equipped with its high-tech 340-horsepower supercharged 3.0-liter V6 offers involving performance to the tune of a 5.1-second zero-to-60 mph time and an electronically limited 161-mph top speed. The more highly strung F-TYPE S merely ups the ante a bit. An increase of 60 horsepower achieved largely through additional tuning means the F-TYPE S can bolt from zero-to-60 in 4.8 seconds and hit a top speed (also electronically controlled) of 171 mph. Those opting for the 495-horsepower V8 S model will be able to sprint from zero-to-60 in 4.2 seconds and achieve a top speed of 186 mph. Drag racers will find the mid-range F-TYPE S aids their efforts with "Dynamic Launch Mode." In classic drag race fashion you can stand on the gas to build revs while your other foot depresses the brake. When "Dynamic Launch Ready" appears on the instrument panel, simply release the brake pedal for max acceleration.

Dynamic Launch Mode is one of a plethora of electronic driving aids available in the F-TYPE range. The keystone among these is Dynamic Mode that enables you to tune the throttle response, steering weight, gear changes and stability control threshold to match your preferences. The logical (?) extension of this is the Configurable Dynamics option that enables you to select the elements of Dynamic Mode that you want to alter. In this way you can do things like tailor the shock damping, steering rate and throttle response to your liking, while leaving other settings at factory spec. It also allows you to record data like lap and split times, brake-and-throttle inputs and G-forces generated. Doubtful this will make you an F1 driver, but it is amusing.

Smartest Transmission We Can Remember Testing

Also amusing is the Quickshift automatic transmission, although in light of its wide-ranging capabilities, calling it an automatic transmission almost seems like an insult. First off, it features eight closely spaced gear ratios, tuned, so Jaguar says, to favor acceleration over fuel economy. But that’s just the beginning. With 25 different programs available, the transmission figures out your driving style and builds to suit. If you’re hurrying the car down the road with aggressive acceleration and cornering, the transmission will make quicker shifts and kick the shift points higher. Of course, you can choose your own gears by slipping the shift lever to the left and manipulating the steering-wheel-mounted paddles, and shifts are quick and sure because the transmission locks out the torque converter once you’re in second gear.

The transmission also prompts the engine management system to blip the throttle to match engine revolutions when you downshift, so you can make a couple quick downshifts in rapid fashion when desired. Even spookier (in a good way) is Corner Recognition that senses when the car is going around a curve and holds the gear rather than upshifting, so you obtain a smooth and powerful exit.

You might wonder if all this electronic gadgetry blunts the driving experience and leaves you as the driver feeling uninvolved, but in our estimation, after pushing various versions of the car around the northern Spanish countryside for hour upon hour over the course of two solid days, we feel the aids make the F-TYPE more enjoyable and at the same time increase its capabilities in the hands of the vast majority of drivers.

Worthy Successor to a Legendary Car

So after a gap of 50 years Jaguar has produced a worthy successor to the fabled E-Type. To our eyes it is not as drop-dead gorgeous as the drophead gorgeous E-Type was, but that is a very tough act to follow. In the modern context, the F-TYPE is a very good looking car that offers referential E-Type elements without being painted with the "retro" brush. Dynamically, the new F-TYPE finds itself in very fast company, a sports car with accelerative, braking and cornering ability that transcend its price. It is certainly a purer sports machine than the Mercedes-Benz SL, and though Jaguar execs touted it as a Porsche 911 competitor, it strikes us as more analogous to the Chevrolet Corvette than the 911. Perhaps that is as it should be, because as in the E-Type years, Jaguar looks to North America for something like half its worldwide F-TYPE sales. The Jaguar F-TYPE comes to our shores this summer. We’ve been waiting a long, long time.