The Jaguar F-TYPE meets its Predecessor! 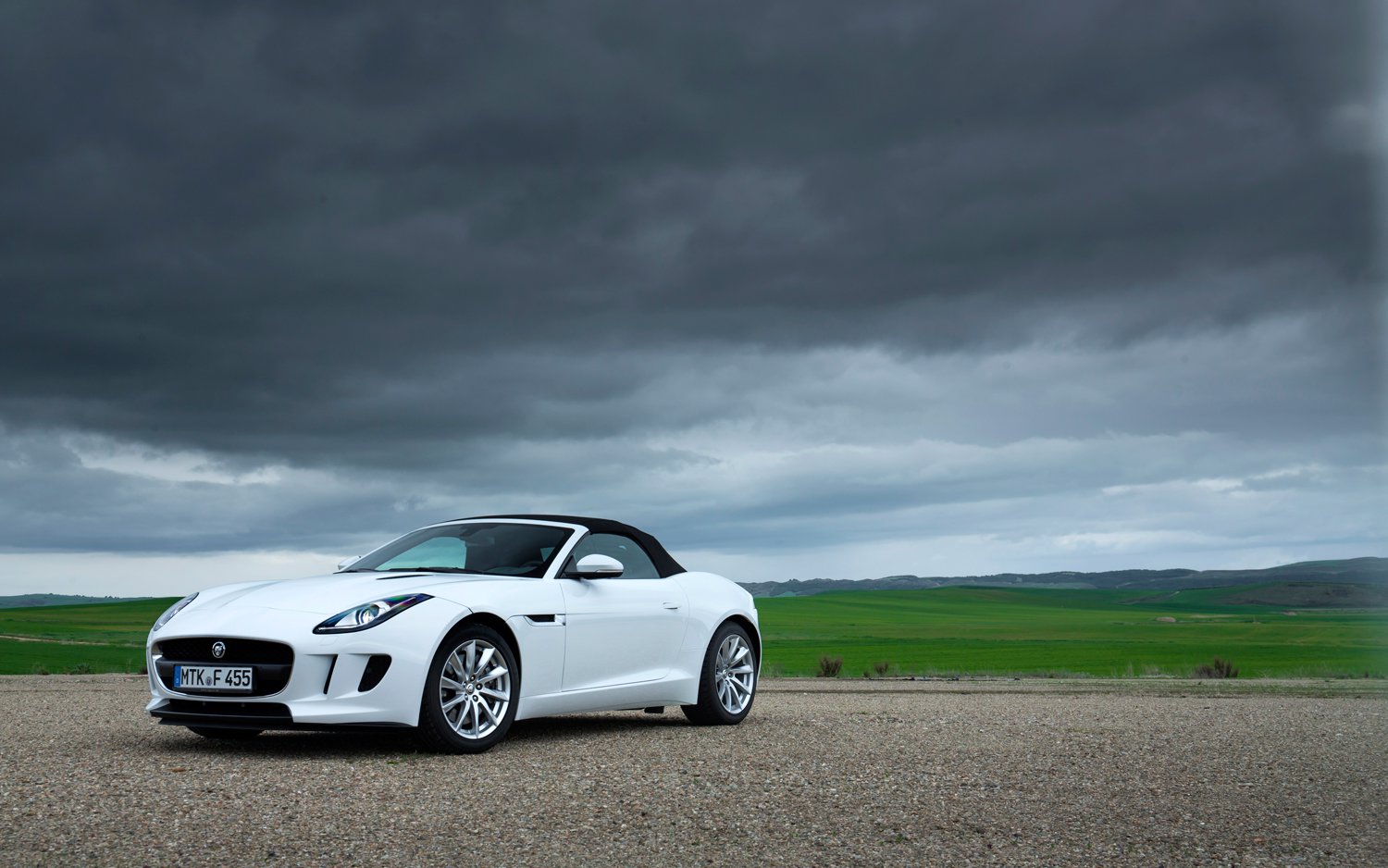 The instant designer Ian Callum began to calmly speak about his new design, it was apparent that Jaguar had decided to confront the F-TYPE’s first problem — the ancient E-Type — head on. Never mind that the E-Type was introduced in 1961, and left the stage along with Richard Nixon’s presidency. It was an ominous presence here, a fuselage-shaped ghost threatening to haunt the new cat king’s coronation.

In fact, an E-Type was at the event. It shared the courtyard stage alongside a C-Type and D-Type Le Mans racer, making for a Holy Trinity of Jag alphabet-soup sports cars ceremonially arranged around the F in Pamplona, Spain, a place better known for rampaging bulls than fleet-footed cats

I was all ears, because the E-Type largely shaped my own conception of what a sports car is supposed be — and certainly should look like. I had driven a ’66 roadster to high school (among Orange County’s most astonishing parental misjudgments). And as a refresher before packing for Spain, I’d asked a friend if I could go for a ride in his spectacular ’65 example. All the magic remained — the urgent cam chain whir, the hood so long it prompted off-color jokes, the view of the taut grilles of louvers set on top of it (mine, often venting steam), the patented English burble when you’d lift off its throttle. How could the F-TYPE possibly top this?

Pointing to the nearby E-Type, Callum calmly said it can’t. And, basically, get over it. Lawyerly, he explained that modern regulations on crash standards, bumpers, lighting, rollover — the whole thick book of them — simply wouldn’t permit an E-Type’s existence today. It’s a pointless comparison. Moreover (my addition here), after a 40-year hiatus that included at least a pair of stillborn attempts at an F-TYPE, almost two generations of sports car drivers have simply never known a Jag sports car. So maybe this is a ghost that only my generation and older are even able to see. Lucky then, that Ratan Tata, head of the company that owns Jag, also had an E-Type and quickly insisted that a replacement would be built. A tough move given the depressing reality that sports cars are, at most, 1 percent of the world car market.

f regulations tied one of Callum’s hands behind his back, the free one has done its damndest to make up for it. His F-TYPE is a wonderful-looking car. It’s shorter and chunkier than I expected — about the width of a Camaro, but 14 inches shorter and 3 inches lower. Callum has used sculptural reliefs to visually manipulate its proportions. For instance, there’s that eye-catching horizontal flare low on the car’s tall flanks. (There’s one much like it on the new Corvette.) And in Callum’s hands, the F-TYPE’s stern is a study in deft problem-solving. In plain view it slices sharply narrow after the rear wheels to reduce bulk; there’s an echo of the E-Type in the thin wraparound taillights punctuated by round embellishments; and the rear bumper just sort of disappears, letting your eyes focus on the twin, centered tailpipes — again, a la the E-Type.

Actually, those twin pipes identify the two V-6-engined cars — the V-8 edition gets pairs set to either side. The "base" F-TYPE is powered by a 3-liter, 340-hp supercharged and water-intercooled 3-liter V-6. The F Type S is a tweaked version of it with 380 hp, and topping the range is the also supercharged and water-intercooled 5-liter V-8 with 495 hp. All of them communicate their horsepower to their rear wheels via an eight-speed Quickshift (no exaggeration) automatic transmission, and are encased in a capsule of stamped, tubular, and cast aluminum elements riveted and bonded into an unusually solid, aluminum chassis. That’s despite the typical over-engine brace having been replaced by a complicated structure that horizontally bridges around the front of the engine bay, in order to keep the hood as low as possible. The whole lot’s suspended by forged aluminum upper and lower A-arms, shot right out to the car’s four corners. 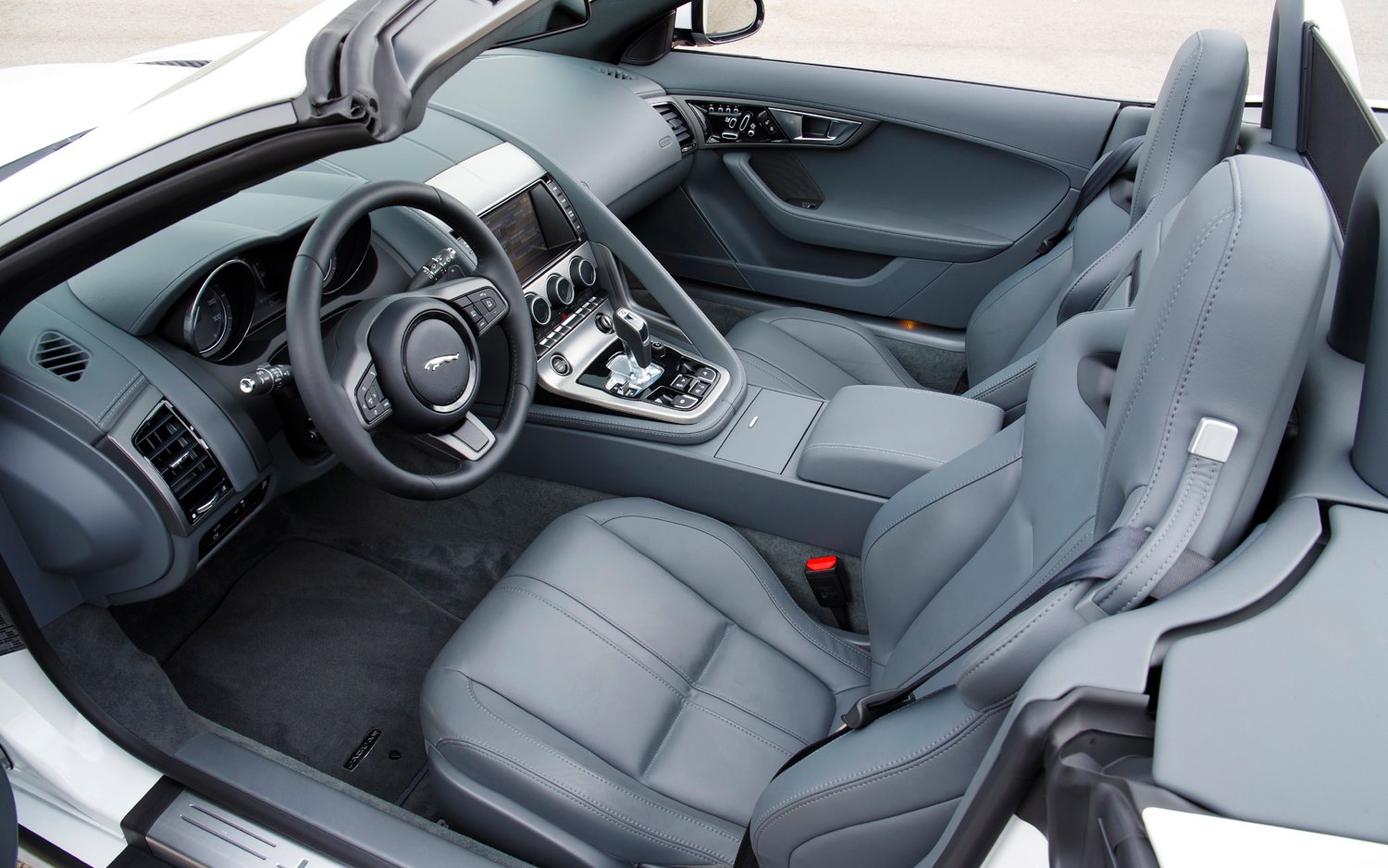 Like most modern cars, it’s packed with approximately one zillion technical details I could now empty onto your synapses like a barrel of factoid pebbles – but about 96 percent of them aren’t particularly unusual. Which are? These: In a nod to the E, the hood ("It’s a bonnet, man, call it a bonnet!") is an enormous, forward-tilting, one-piece all-aluminum clamshell that dramatically reveals a molded engine cover. Geez, there’s a theatrical letdown after having witnessed the E-Type’s magisterial hood/bonnet opening. On the other hand, the F-TYPE’s supercharger, nestled in the vee, needs all the hushing it can get, so the design is more than just a way to hide a messy-looking engine.

More simplification comes from the interior door stampings, created via "warm-forming," in which they’re preheated to 500 F before shaping, allowing for a single convoluted part to replace several smaller bonded-together ones. Jag says that with two occupants, the car has a 50-50 weight balance (52/48 unloaded), with its all-up weight ranging from 3520 to 3670 pounds. To achieve that balance, both the battery — and strangely, the windshield-washer fluid reservoir — are located in the rear. This eats some critical cubics from an already tiny, 7.1-cubic-foot trunk — maybe another E-Type reference?

There’s welcome sophistication in its Start/Stop system, too. (My old E-Type often died at stops as well, though the re-starting part was always a bit iffy.) In awkward instances such as when the engine has signed off exactly when the traffic light’s gone green and you shout "No!," the Jag’s software recognizes your right foot’s panic and quickly sets things spinning again with a well-timed injector squirt.

Usually, when a carmaker invites you to drive several variations of their pride and joy, they secretly hope you skip the lesser ones and have a cappuccino after lunch instead. Not here. We guzzled our cappuccinos to find each one of the F-TYPE trio solid players, depending on your pocketbook and driving tastes. Starting at $69,895, the ‘base’ F-TYPE is simply a great driving car; frankly, I don’t have a single serious criticism besides the tiny trunk.

When you walk up to it, a press of the fob’s unlock button (or a graze of the door handle) causes the aerodynamic door pull to smoothly rotate out and greet your hand, somewhat akin to the Tesla Model S’ handle. It’s a friendly introduction. 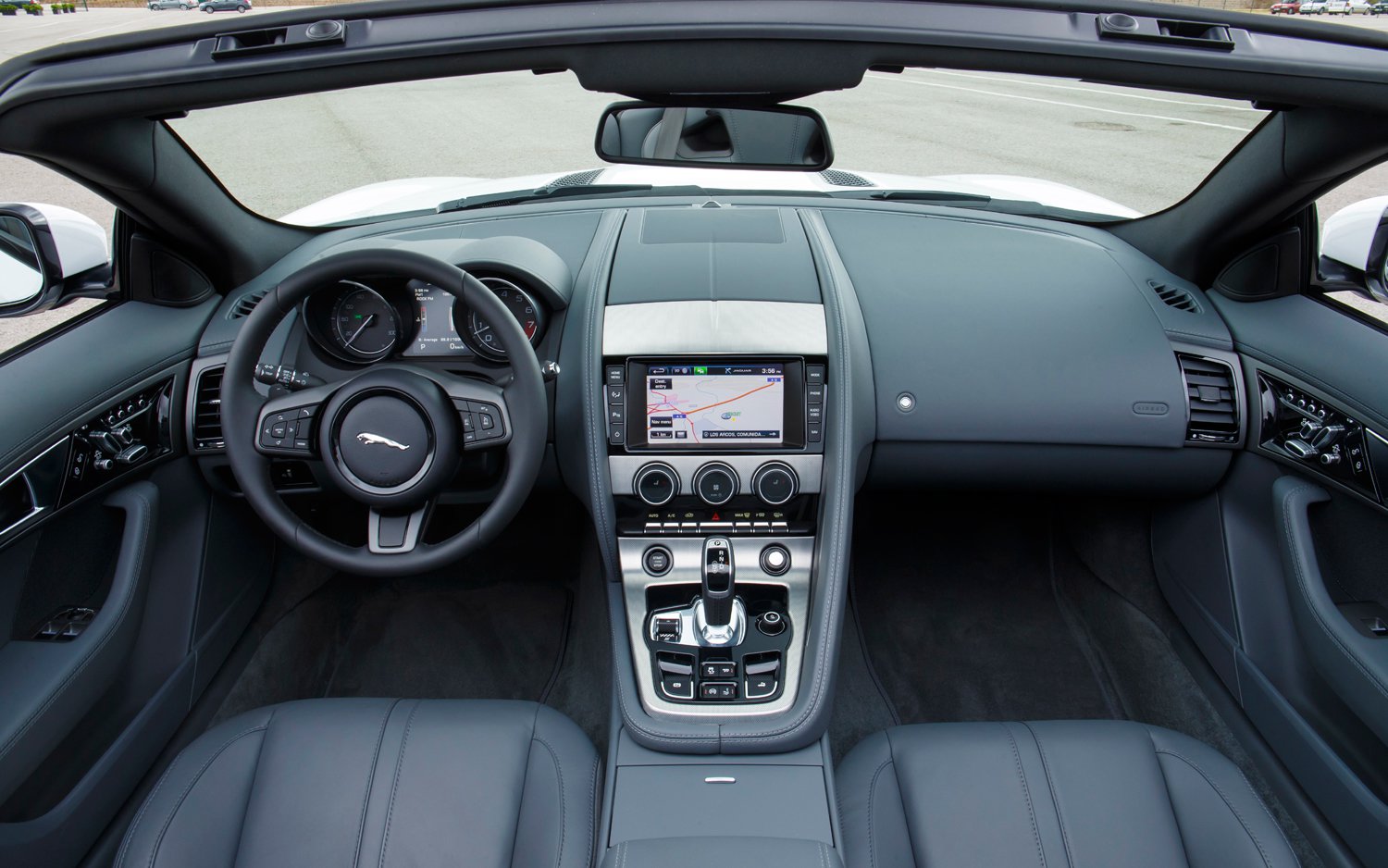 And yes, despite some of its modest specs — 18-inch rubber, non-adjustable shocks, and an open diff — it’s a hoot and a half to drive, scatting to 60 mph in 5.1 seconds, but more critically, cornering like the sports car Jaguar’s been too long without. The steering is simply excellent — just the right effort, delicious feel, and exactly the rare characteristic of vacuuming its nose into corners that I like. Throttle response is instant, as the torque converter locks once into second gear, and the suspension expertly blends very modest roll angles with an appropriately taut ride quality. (Only here and there are the g’s at the bottom dips dismaying). In concert, the highly adjustable seats hold your torso as tightly as you can bear, while outward vision is good, top up or down. (The side mirrors are generously sized.) The top drops in 12 seconds at up to 30 mph; at 60 the spoiler raises, lowering again below 40 mph.

And with the top down, I simply defy you to not to silly-grin while triggering downshifts with the shifter paddles. The transmission quickly matches revs, and every time the acoustic fireworks are just nuts. Our Motor Trend YouTube videographer, Anthony Esposito, quipped that it sounded like we’re being constantly chased by a Kansas thunderstorm. It snaps, crackles, and pops so much, you wonder if Kellogg’s had a hand in it. After the technical walk-through, I asked what had been done to acoustically tune the exhausts this way. "Not much, actually" was the straight-faced answer. What a lovely lie. I wonder if Steinway puts as much effort into the sound of its concert grands.

As good as the base F is, writing a check for $81,895 buys you noticeably more of it, including those extra 40 hp, plus adjustable-damping shocks, a mechanical limited-slip differential, a shorter final drive ratio, 19-inch wheels, bigger brakes, a screenful of driving configuration options, launch control, and a 0-60 time dropped to 4.8 seconds. This car is the sweet spot of the lineup.

And by no accident was it the version Jaguar brought to the Navarra road course for us to drive fast. The V-6 S turns in with the same relish as the base version, but arcs through the corners at even higher speeds. It unreels power from its rear wheels with greater confidence, and stops even harder for the next corner. Approaching the apexes, I noticed a bit of understeer, but a tap of the throttle smoothly erased it. Afterward, I was asked how it drove. I was blank for a moment. What I remembered were the braking cones, the apexes, the rumble strips along the edges. The car was such a easy-to-use tool that it seemed secondary. 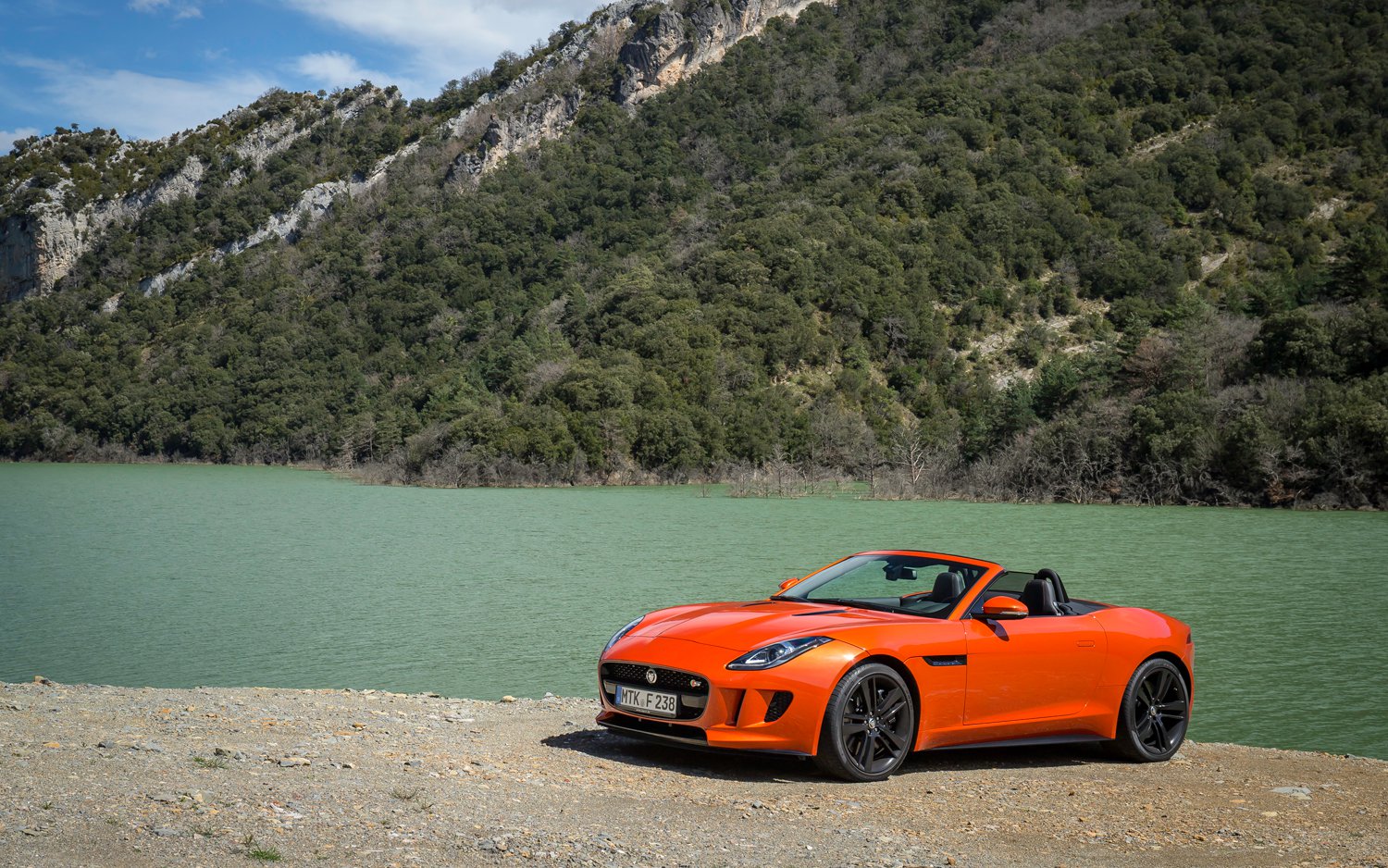 The $92,895 F-TYPE V-8 S is another breed of cat, however. Pouring another 110 hp into the chassis really pushes the limits, despite its 20-inch wheels, 295mm wide rear Pirelli P Zero rubber, electronically controlled limited-slip differential, and even larger brakes. When Anthony and I climbed in it, I instantly said, "This must be the GT500 version." After a few miles threading through Spanish canyons, Anthony said, "No, I think it’s the 427 Cobra edition." He’s right. This is one big-clawed cat that erupts with acceleration much more violently than its 4.2-second 0-60 claim implies. Yet, what with its modest 110 extra pounds being added mainly at the car’s extremities — the bigger engine up front, the more complicated differential in back, the heavier wheels and tires at all four corners — the V8 S’ polar moment feels much, much higher. It’s slower-reacting; more ponycar than sports car. In the hands of our Randy Pobst, I’m sure it’s a much faster track car — but not in mine, kiddo. I’d prefer to spend my time exploring this one’s well-thought-out center-stack knobs, fingering the Dynamic Mode toggle, enjoying the refresh quickness of the touch-sensitive display, and of course, lifting off the throttle again and again, and counting the crackles and pops from the exhaust.

I’ll admit that when I stepped off the plane in Spain, I was wearing my Mr. Skeptical, I-once-owned-an-E-Type-and this-is-no-E-Type face. The F would do little more than rattle around in the big shoes of its illustrious predecessor — the car Enzo Ferrari once called the best-looking in the world and New York’s Museum of Modern Art added as part of its permanent collection.

Time will tell about the F-TYPE’s MOMA inclusion. But you’ll only have to wait until summer. 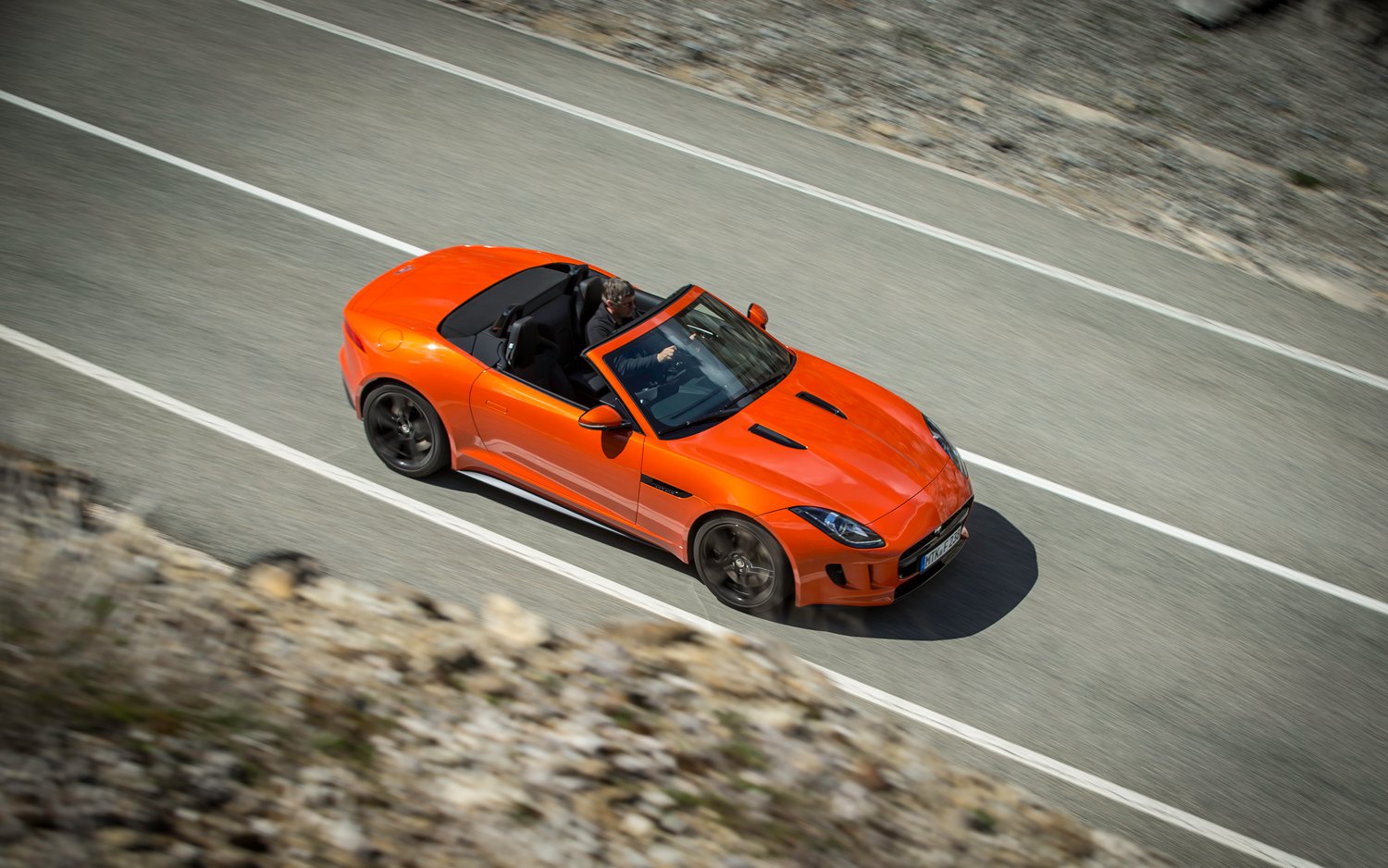