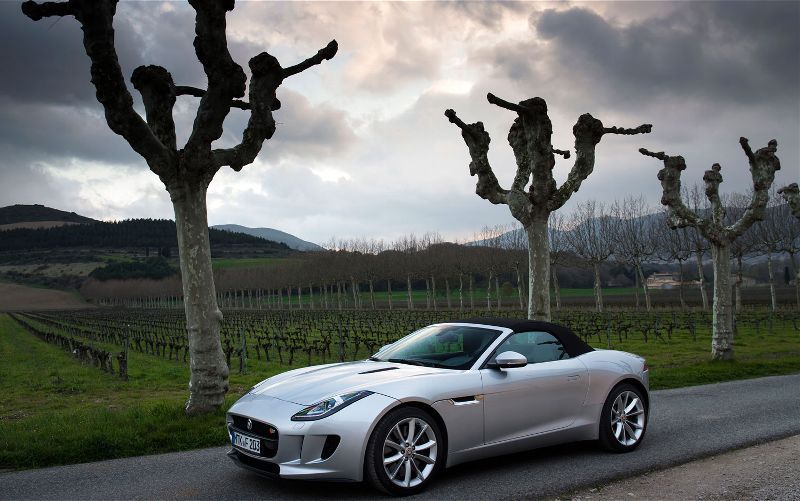 We drove the 2014 Jaguar F-TYPE last Thursday and Friday in the Navarra region of northeastern Spain. By Friday evening, we were sitting at a dinner table in Normandy at the home of a couple of friends who split their time between Paris and France’s northern coast. They know that media previews of new cars often bring us to Europe but don’t have the details of this particular trip.

“So, what were you driving in Spain?”

We scroll through the camera roll on our iPhone and hand it over. In the picture, we’re standing next to a salsa red F-TYPE against a backdrop of a rolling green pasture and a field of bright yellow rapeseed.

Any doubts we might have had about the claim that the 2014 Jaguar F-TYPE is “Jaguar’s first sports car in 50 years” are thus dispelled, and the company’s expectation that some 90% of F-TYPE buyers will be new to the Jaguar brand is also confirmed. This particular couple, one of whom is an American, has owned all manner of BMWs, Mercedes-Benzes, and Porsches over the past two decades, although the only British car they’ve had is a 1962 Rolls-Royce Silver Cloud. We’d driven their Mercedes CLS diesel up from Paris, and it was sitting in the crunchy French gravel of their drive as we spoke. (They embrace all aspects of French culture except French cars.) In other words, they are exactly the type of customers that Jaguar is hoping to lure away from German brands with the 2014 Jaguar F-TYPE. As they further examine my iPhone photo, they declare that the new roadster reminds them of the E-Type, which they describe as “the most beautiful car ever made.”

Back in the courtyard of the Muga de Beloso Alma Hotel in Pamplona, the city in northeastern Spain that you might recall as the place where Ernest Hemingway fully indulged his passion for bull-fighting, Jaguar had displayed the new F-TYPE alongside its three single-letter forebears, the C-Type, the D-Type, and the E-Type. A brave move, you might conclude, to put one’s 2014 automobile up against three of the most sensuous automotive shapes not just from Jaguar but also of the entire postwar era. We say, if you’ve got heritage, flaunt it. After all, of the vintage trio, only the E-Type was a true roadgoing car, and there’s no denying that the F-TYPE oozes its own flavor of 21st century sex appeal. We first saw the F-TYPE’s design direction in the C-X16 concept from the 2011 Frankfurt Motor Show.

Only through design will Jaguar even get Mercedes-Benz, BMW, Audi, and Porsche buyers to glance at a Jaguar showroom. Porsche, you ask? Indeed, Jaguar has a bit of a carmaker-crush on Porsche and, like every sports car manufacturer in the world, will be highly flattered by any comparisons made to the products from Zuffenhausen. To drive home the point, Jaguar representatives continually remind us that every version of the F-TYPE will cost about 25% less than comparable Porsche 911 models. 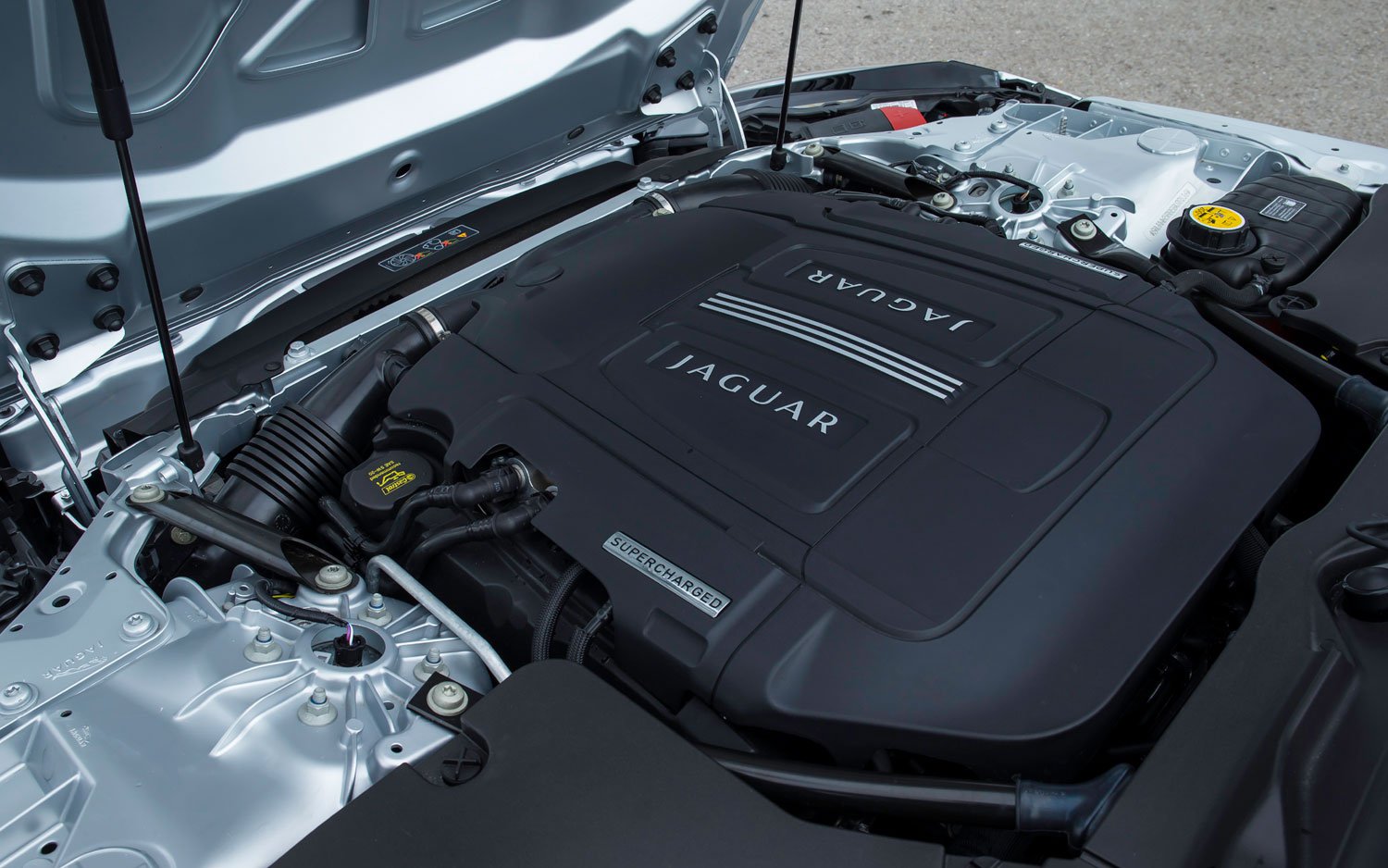 All models are mated to ZF’s eight-speed automatic transmission, which Jaguar calls Quickshift. You might be tempted to dis Jaguar for the lack of a manual gearbox but, then again, the upcoming Porsche 911 GT3 won’t have one, either. And if Jaguar were to offer one, virtually no one would buy it. Still, it’s always sad to see a sports car model line with no clutch pedal in sight.

Aside from the obvious powertrain development, the F-TYPE program “required a fundamental shift in Jaguar DNA,” says Ian Hoban, who’s been with the automaker for 23 years and now serves as vehicle line director for all its products. The catchphrase he and his team use, “Connected Feel,” describes their attempts to imbue the F-TYPE with “immediate, precise, and proportional response to all driver inputs.” To that end, the F-TYPE has 10% faster steering than any other Jaguar, the lightest and stiffest body structure of any Jaguar, and an aggressively tuned version of Jaguar’s Adaptive Dynamics damping system. The V6 S is fitted with a mechanical limited-slip differential, while the V8 S gets an electronically controlled version that uses a multi-plate clutch to send torque to the rear wheel with the most grip.

Like the XJ and XK, the F-TYPE has a bonded-and-riveted aluminum body structure cloaked in aluminum body panels. (The trunk lid is composite.) The structure, which consists of 141 aluminum pressings, 18 high-pressure die castings, and 24 extrusions, is some 77 lb lighter than a comparable steel structure. Jaguar engineers are particularly proud of the single stamping of the clamshell hood because of the crisp folds they were able to create, which made the design team happy.

Climb behind the wheel of the F-TYPE, and there’s definitely an immediate sense that you’re in a different sort of Jaguar. You sit nearly an inch lower than in Jaguar’s previous sportiest car, the XKR-S coupe. The cabin is modern and luxurious but not affected, with a row of substantial rocker switches and big twist dials for climate control, a nicely stitched grab handle that delineates the driver’s space from the passenger’s, a chunky gearshift lever that is the antithesis of the fussy old Jaguar J-gate shifter, and a small and simple steering wheel (three versions of the steering wheel are available, including a flat-bottomed one and one with Alcantara). In S models, the Dynamic Mode button, the shift paddles, and the start button are accented in orange. Fit and finish are very good. A set of vents at the top of the center stack rises when the climate control system dictates they are needed and otherwise disappear into the dash. Jaguar always concocts at least one parlor trick for its cabins these days, it seems.

Our test cars were fitted with optional fully power-adjustable seats, but base seats have manual fore-and-aft movement to save weight. Jaguar considered something akin to Mercedes-Benz’s Airscarf to blow warm air on your neck but rejected it due to packaging concerns. This is not a particularly big cabin. People over 6’2″ or 6’3″ might find legroom lacking. You’re on intimate terms with your passenger, but there’s still a substantial amount of instrument panel between you and the windshield. The F-TYPE feels good from the passenger’s seat. You feel like you’re part of the car even though you don’t have the steering wheel in your hands, and the door handle and grab bar are ideal for bracing yourself for g-forces.

The fabric top goes down in only 12 seconds at speeds of up to 30 mph and folds neatly behind the seats. The trunk is shallow, oddly shaped, and small, with only 7.0 cubic feet of space. It’s not for golf clubs, but if you’re a golfer, Jaguar will point you to the XK.

Within the first few miles, you’ll notice the F-TYPE’s stiff body structure, for sure, as there’s virtually no cowl shake or undue bending or flexing. You’ll also realize that this is still a relatively heavy car. Curb weights range from 3521 lb for the V6 to 3671 lb for the V8 S, so you understand why Jaguar engineers were obliged to provide a lot of power under the hood.

Even the base V6 is more than sufficient thanks in part to the Quickshift transmission, which disconnects the torque converter once you’re in second gear to create a direct mechanical connection between the engine and the rear wheels. To shift manually, either nudge the gearshift lever into its left gate and pull it back for upshifts and shove it forward for downshifts. Or, our preference, use the shift paddles. Hit the Dynamic Mode switch on the center console, confirmed by a checkered flag in the driver’s display cluster, and the transmission will hold on to gears at redline and automatically blip the throttle during downshifts. 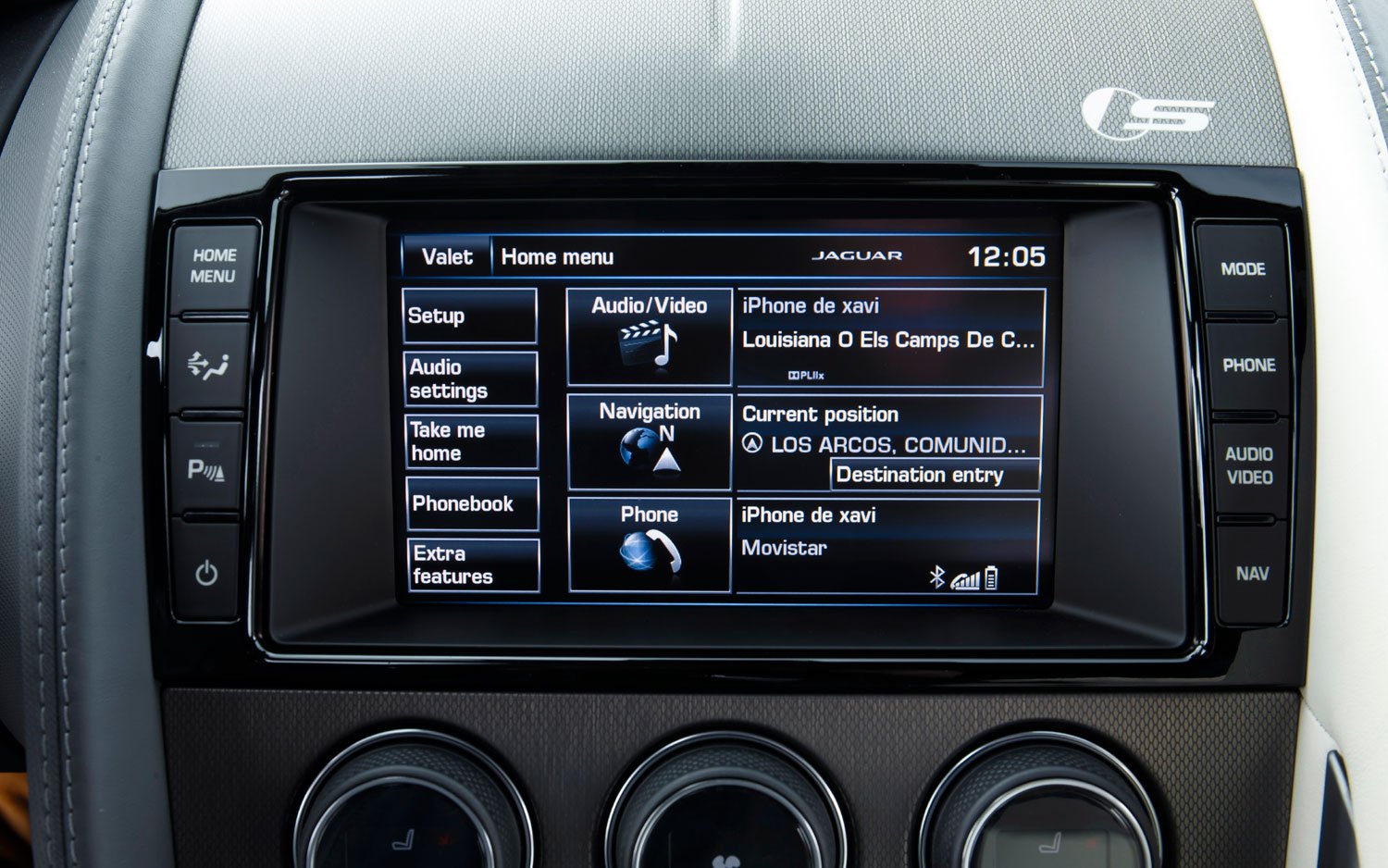 You’ll want to blip the throttle yourself nonstop to take full advantage of the Active Exhaust system (optional on V6, standard on V6 S and V8 S), which opens bypass valves in the exhaust under hard acceleration. The sweet mechanical music that follows, especially the crackle and pop when you lift off the gas, are worthy of an Italian supercar. V6 models have twin center exhaust outlets, in a nod to the E-Type, while the V8 has quad outlets, two at each corner.

The F-TYPE’s steering is relatively light yet very precise, with good feel, even if it’s not as hyper-communicative as, say, the Porsche Boxster’s. At the Circuito de Navarra, a racetrack set into stunning landscape in the foothills south of Pamplona, it was easy to direct an F-TYPE S into tight corners, and the brakes, with excellent pedal modulation and pressure, were ready for track duty. The gearbox responded quickly to slaps of the shift paddles, especially when multiple downshifts were required. Stability control wasn’t overly intrusive during a few brief laps of the circuit with a British driving instructor named Chris riding shotgun. Chris did not offer to let us drive with stability turned off, but the F-TYPE feels like it would willingly rotate if he had.

As composed and fun as the two V6 models are, it’s the V8 S that has the visceral nature that gives real credence to Jaguar’s “sports car” claim. It’s a different beast altogether, with far more character and personality and verve, and Jaguar expects it to comprise half of all U.S. sales. On the second day of the media program, we drove it on a loop northeast of Pamplona through fantastically scenic mountain roads snaking along a series of rivers bursting with spring snow melt, top down despite the 38-degree morning chill, and the F-TYPE had all the right moves and made all the right sounds. Grip, even in tight corners on wet roads, was excellent, and the car was flat and composed without ride harshness. It was pretty great.

Our initial drives of the 2014 Jaguar F-TYPE make us think that the storied British marque has entered a new era and that this is the Jaguar that will finally pry some people out of their German cars. 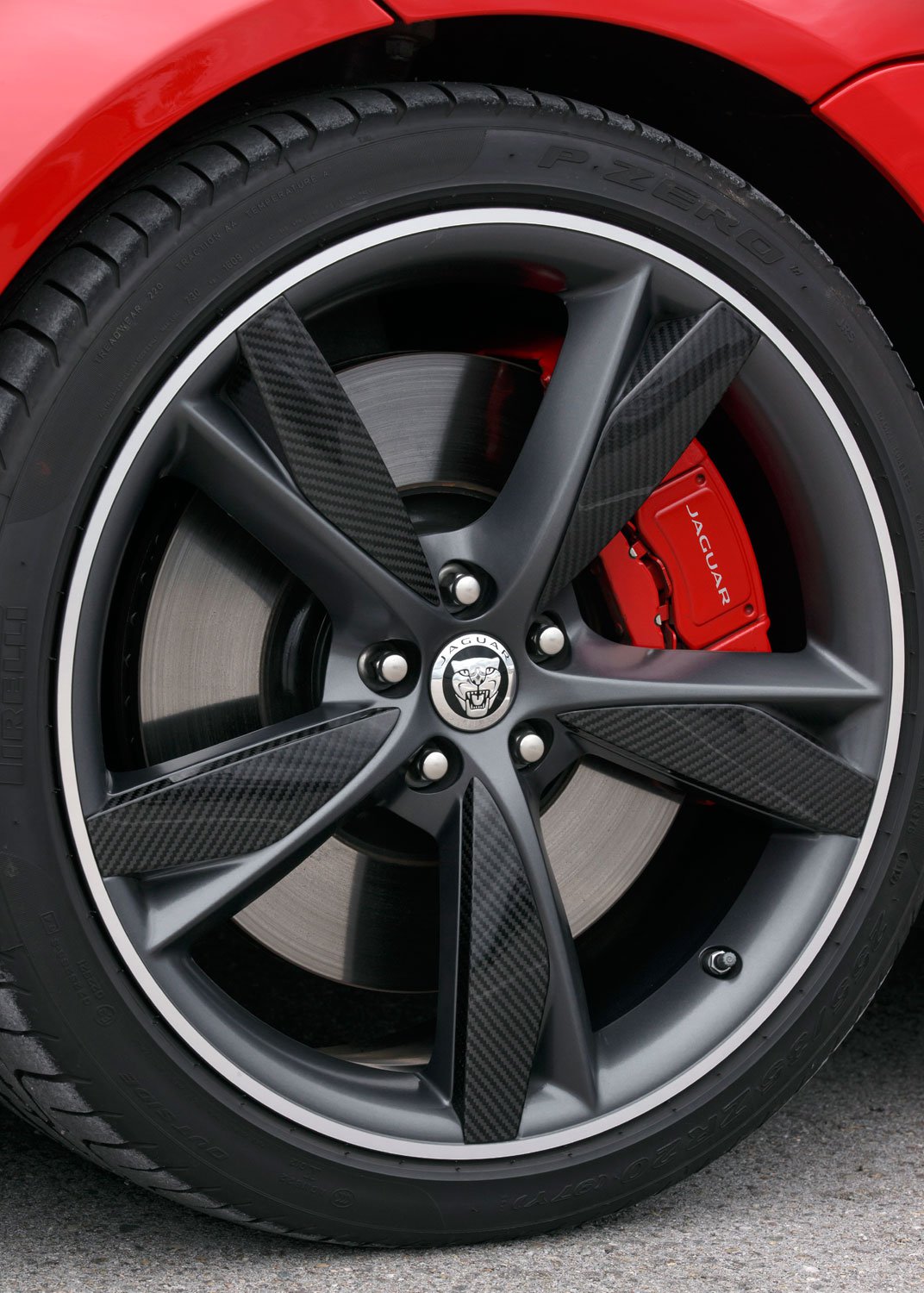